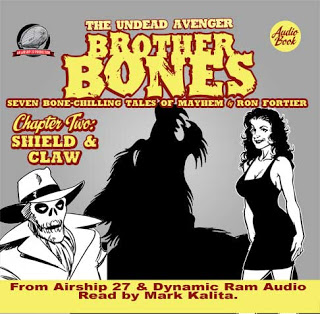 Airship 27 Productions and Dynamic Ram Audio are very, very happy to announce the release of the second Brother Bones audio pulp adventure as read by Mark Kalita with production by Sound Engineer Chris Barnes.
Following the successful release of the origin story, “The Bone Brothers,” this second story, of the seven that appeared in Airship 27 Productions’ book BROTHER BONES – THE UNDEAD AVENGER, is titled “Shield and Claw,” and has the grim hero of Port Noir battling a savage werewolf in a fast paced, melodramatics audio experience.
“Once again, voice actor Mark Kalita provides the chills,” Airship 27 Managing Editor Ron Fortier applauds enthusiastically.  “His reading pulls the listener along like a runaway freight train and Chris adds the proper mood music and effects to properly heighten the suspense.”
Airship 27 Production is selling each of the original stories individually for $2 each as mp3 downloads from their website.  After all seven have been produced and released individually, the entire book audio package will go on sale for $9.99, a $4 savings.
Art Director Rob Davis has provided cover images from the illustrations he drew for each story.   SHIELD AND CLAW is an audio pulp written by Ron Fortier and read by Mark Kalita is now on sale and is the perfect “treat” for this Halloween season.
(http://robmdavis.com/Airship27Hangar/index.airshipHangar.html#brobones2)
We are also in the process of putting out a brand new edition of the book that will soon be available on Create Space, Amazon, Indy Planet and Kindle.