Michael Davis: Why Do I Read Comics? Part 2

Some weeks ago I wrote part one of this series then I went to France and forgot to file it before I went. Once I arrived in France I was blown away by my comic experience and wrote about intending to file this once I returned.

When I returned a suicidal next door neighbor of mine placed a bag of shit on my doorstep and that pissed me off to such an extent that I completely forgot to file the article and instead dealt with that idiot whom I’m sure will never ever look at my house again after my visit to his home.

Why, you ask, did someone place a bag of shit on my doorstep? Long story short, this asswipe keeps feeding my dogs after being told numerous times not to.

So, dogs being dogs, they keep sniffing around his yard (we share a short brick wall in our backyards and my dogs can easily jump over it) looking for food. Well one of my dogs must have left a bundle of doo-doo as a “thank you for feeding us” or a “fuck you, where’s the food” on that particular visit.

Either way, this moron picks up the doggie doo and leaves it on my doorstep. I was so livid that I forgot to file this article again. Instead, I stood in front of my neighbor’s house throwing up gang signs while the stereo at my house blasted 50 Cent’s, “my gun go off.” I knocked on his door but he didn’t answer hence my gang and 50-cent serenade. In hindsight, perhaps I should not have been yelling “Open the door, bitch!” 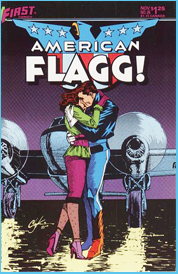 Please refer to part one of this article. Last whenever, I wrote about my love of comics and how I stopped reading them all together by the time I got to college. I was pretty sure that I was done with comics when Frank Miller brought me back.

I was at all places, an Elton John concert, and the guy sitting next to me was reading a Frank Miller Daredevil. I smiled remembering when I was a young impressionable lad who once wasted his time on comics. The guy caught my smile and asked “Have you read this one yet?”

I told him I didn’t read comics anymore. He asked me why and I explained that I grew out of them, yada, yada, yada. He said (and he was right) that it sounded like I stopped reading comics because of peer pressure. He also offered that I didn’t seem like the type of guy who cared what anyone else thought.

“What makes you say that? You just met me.” I said.

“Take a good look around.” He responded.

I was at Madison Square Garden and I did take a look around. Nothing struck me as anything that would give this guy a clue to what I cared about or not. I was about to ask him what he was smoking when it hit me.

As far as I could tell I was one of maybe four to possibly six black people who were there to see Elton John so, clearly, he was right, I’ve never cared about what anyone thought of me. It dawned on me at that moment that I did stop reading comics because I was concerned about how I would be perceived.

The look of “oh shit” must have taken up residence on my face because my new friend just laughed. He then did something I will always be thankful for, he gave me that copy of Daredevil to read while we waited for the opening act and while reading I’m sure my “oh shit” look never left my face.

I was amazed just how different and damn good Frank Miller’s Daredevil was. The comics I read before I stopped collecting were good but this was another kind of good, this was on a level I had not experienced before in comics.

Forbidden Planet is located in Manhattan’s Greenwich Village and has a huge comic book community presence. The next day I went there and purchased the entire run of Frank Miller’s Daredevil and returned to my home to eagerly read them.

I had no idea who this Miller guy was but these books were some of the greatest comics I’d ever read. In fact they were some of the greatest stories I’d ever read regardless of the format. After discovering Daredevil I went on a pretty good buying spree of comics and realized quickly that the game had changed in six years so much so that I was blown away almost daily by the work that was being done.

Wolfman and Perez’s Teen Titans, Walt Simonson’s Thor, Howard Chaykin’s American Flagg and Moore and Bolland’s The Killing Joke were among the many new (to me) comics I was overdosing on. In the six years I was away from comics there had been a sea change and I was back, like an addict at a crack house.

For me that sea change still exists in the industry and that my friend is why I still read comics. Forget about the glut of Spider-Man or Batman titles. Forget the yearly cross over or the predictable “death of” storylines. Forget the gimmicks such as variant covers or stories “ripped from today’s headlines” like the gay character or Archie kissing black girl bullshit.

Forget all that crap, some of the work coming from today’s creators is just fantastic. I picked up a trade paperback of The Twelve from Marvel while in France and it was simply incredible and that’s just the tip of the creative iceberg of what is being done today.

Yes, comics for the most part are the same superhero crap that it has been for decades but the best of this industry, the original outstanding work being done in comics translates into the best of any industry.

Film, television or under-fucking-roos, the best material from comics makes any other medium worth watching or, in the case of Underoos, worth wearing.

To put it simply, I still read comics because no matter how old I am (21, Jean) comics are the best entertainment available for my money today and I don’t care who knows I think that way.

Oh, I’m sure some of you are wondering why the black guy from the hood was at an Elton John concert. The short answer is like comics; Elton John’s music is something I enjoy because he’s just that good. For any other explanation, consult someone who gives a fuck what other people think.