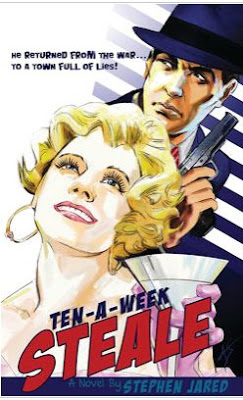 It isn’t very often that an author comes along who simultaneously truly evokes the style and temperament of classic Pulp while adding modern sensibilities and more sophisticated phrases and tricks to the package.    We all strive for it and some of us have moments of it, but very rarely does a writer show up that does it well, consistently, and every time he puts his name on a book.

Author of TEN-A-WEEK-STEALE, Jared is a creator of all sorts.  He’s a writer of course, but he’s also done a bit of time in front of television and film cameras.   He has a love affair with acting and moreso with Hollywood, not Hollywood Today, but Hollywood bygone.   The time when people dreamed in black and white and movie moguls captured those fantasies on celluloid.  And Jared’s not just a devotee of the films of Hollywood.  He’s very much a historian of sorts, fiction being his tool to ferret into fact.  In his work he shows you the hubris, the horror, and the humanity that made Classic Hollywood both the Heaven and Babylon it truly was.

Stephen’s first book, JACK AND THE JUNGLE LION, took a look at the fantasy and fallacy of the classic Matinee idol.  TEN-A-WEEK STEALE pulls the curtain even farther back on the reality behind Hollywood by inserting a no nonsense lead character into the fray.  Walter Steale, a World War 1 Veteran, works as muscle for his brother, a politician with great aspirations and appetites, in the Los Angeles of the 1920s.   Almost by accident while handling what should be a small job for his brother, Steale stumbles into a tangle of murder, conspiracy, politics, and corpses as he goes from being hired help to Most Wanted by both sides of the law.

TEN-A-WEEK STEALE has been lauded as being a fantastic work in the tradition of the old Pulp/Noir masters and it is indeed that, but it is something else entirely.  Jared infuses every single word of this book not only with the past, but with the anxiety, the falsity, the need for truth of today.  Steale isn’t just a lost soul of the Great War, he’s an everyman pulled by no fault of his own really into situations that are far beyond him.   And, unlike many such types today, Steale doesn’t blend in, fade away, or go with the flow.  He comes out fighting, shooting, punching to maintain something that many today feel they’ve lost.   Being his own man.

If you enjoy great noir, this is the book for you.  If you thirst for a novel that balances Past and Present, go get TEN-A-WEEK STEALE by Stephen Jared.

FIVE OUT OF FIVE TIPS OF HANCOCK’S HAT-  The best of the best here, kid.