Marc Alan Fishman: Comic Books – Where A Kid Can Be a Kid 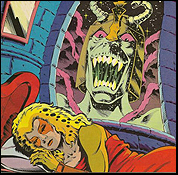 So the other day, in my second life, I was discussing Unshaven Comics with a coworker. He’d just read our first two issues of Disposable Razors. Suffice to say, these early issues of ours were geared towards our peers – violent, misogynistic, foul-mouthed, and raunchy fun. He then asked me about the next issue, featuring the Samurnauts.

“Dude. Why did you go kiddie?”

Deep down, beard be damned, I’m still 12. I can’t walk into a Target / Wal-Mart / Meijer without taking a detour through the toy aisle. My DVR is as full of worthless NBC comedies as it is high quality cartoons. And to a degree, my continuing love for comics in general fulfills that childish need for escapism that obviously will never leave me.

Beyond myself though, I am lucky to be surrounded by two others who share the exact same mentality. We Unshaven Lads make no bones about it… at our core we’re far more interested in giant robots, Kirby krackle, and figuring out the relative power levels of various Power Rangers than the latest polling data, Iranian diplomacy, and the relative cost of bathroom tissue. Suffice to say it was a no-brainer that we’d eventually strike gold by tapping into those roots and pulling out The Samurnauts. Iran be damned.

And what’s truly refreshing? Being able to share our book with everyone. From kids to teens to adults, no one is safe; kung fu monkeys and zombie-cyborg space pirates makes everyone giggle. And when they read the issue and see we do it without having to wink and nudge our audience? Well, that’s when we show that this isn’t just for a gag. Frankly, it’s what’s missing throughout much of mainstream comic books these days. Yup. I’m going there.

You see, when I was growing up (frankly, not all that long ago) we were already knee-deep into the Angst-Era of comics. There was a hard line: either you spurted blood and boobs all over the page or you dubbed your book for kiddies, and neutered everything about it, quality included. And despite the relative universal success of titles like Tiny Titans, Super Dinosaur, and dare I suggest Fables, most books on the shelf still seem to be stuck in a rage. But at the same time Spawn was murdering the comic book world, there was an epiphany in kid-level fiction; animation.

I was truly blessed to grow up on what I consider is the truest golden age of cartoons – Batman: The Animated Series, Superman, the X-Men, and my personal favorite Exo-Squad. All employed the most basic tactic that elevated the term all-ages to an unforeseen level of quality. Simply put, these series all decided it was easier to tell a great story, than worry about talking down to kids. And as a kid, I recognized it.

Here were cartoons that dealt with war, murder, politics, government, ethics, and god knows what else. And sure, there were batarangs, guest stars like Lobo, the Dark Phoenix saga, and Neo-Sapien uprisings, but they were presented and treated without a hip wink at the camera. And because of it, when I turned to the world of comics, I gravitated towards Alan Moore, early Frank Miller, John Ostrander, and Denny O’Neil. Here were guys giving me the same credit as Bruce Timm, and Paul Dini, all without having to plunge their books into infinite sadness and meaningless quarrels.

Don’t get me wrong. I enjoy a touch of the ultra-violence. But when its used every other issue, it deadens the impact. DC especially seems to be marred in grit and angst again, and because of it I’m down to less than half the subscriptions I enjoyed a little over a year ago. The best ongoing title in recent memory was Fantastic Four, which in and of itself was too kind to not spend all its time with gnashed teeth. Meanwhile, Harley Quinn is being plunged into a vat of acid and donning a corset as a costume. Maybe the kid in me is just sick and tired of rape, death, cursing, and thigh pouches in my cape’n’cowls every week, in an effort to boost sales. Maybe it’s why I spend my time amidst future space stations and pirate ships when it’s time for me to give back to the world of comic books.

Now if you’ll excuse me… I need to go load up my Nerf guns. Thundercats is on.