DOUBLE HEADER REVIEW-CLASSIC PULP AUTHOR’S COLLECTION A MUST HAVE! 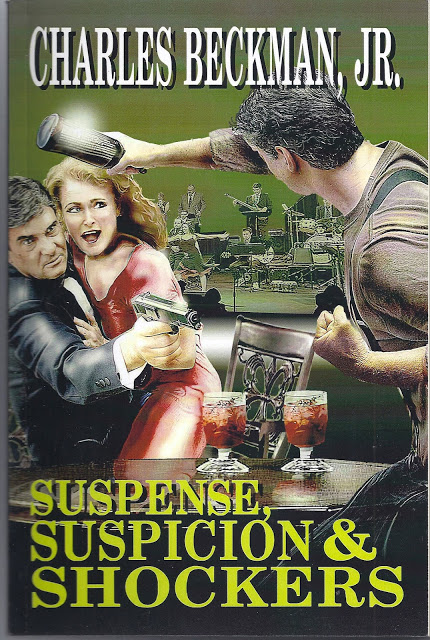 ALL PULP REVIEWS by Ron Fortier
SUSPENSE, SUSPICION & SHOCKERS
By Charles Beckman Jr.
Von Boeckman Fiction Factory Publications
ISBN # 9781479238736
265 pgs.
Several months ago I received an e-mail from a woman named Patti Boeckman. She told me her husband, Charles Boeckman, for most of his life had been a professional pulp writer working in the 40s and 50s under the name of Charles Beckmen.  Between 1945 through to 1975 his short crime stories had appeared in such pulp magazines as Dime Detective, All-Story Detective, Manhunt, Detective Tales to name just a few leading up to many sales in 60s and 70s to Alfred Hitchock’s Mystery Magazine.
A native of Texas, raised during the Great Depression, Charles had two loves; writing and music.  He became a success in both fields.  He taught himself to play saxophone and clarinet and during his travels throughout the south from Texas to Florida he often played with many reputable jazz bands until he formed his own.  In 1990, he earned a star in the South Texas Music Walk of Fame and his band to this day still plays in October Texas Jazz Festival.
What Charles and Patti were unaware of until recently was the resurgence in pulp fiction brought about via the internet which allowed life-long fans and newcomers to come together and begin creating forums to share their love of this escapist literary genre.  Patti, a former school teacher, discovered all this accidently while surfing the web and began to dig deeper into this wonderful phenomenon which invariable led her to the New Pulp Fiction movement.  A smart lady, she jotted down names and e-mail addresses and methodically reached out to many of these “new” pulp enthusiasts and that was how her letter of introduction popped up in my e-mail box.
At that time Patti and Charles were considering collecting many of his crime stories and self-publishing a book.  Hearing this, I, and many of my colleagues, encouraged them to pursue this plan.  The idea of a new collection of authentic pulp tales produced by the actual writer was too good a dream to let slip away.  Then after a few months, Patti wrote again.  This time with the news that they had gone and achieved their objective and the result was this book, “Supsense, Suspicions & Shockers,” by Charles Beckman Jr.  She asked if I would like a copy to review.  That had to be the easiest question I’ve ever answered in my life.
This book, which sports a truly gorgeous cover by amazing Laura Givens, is crammed with twenty-four stories; every single one of them a dazzling display of originality and deft story-telling technique.  Like the finest writers of the pulp era, Beckman had a keen, unerring grasp of human psychology and he employed it like a skillful surgeon carving up plot twists that turn on a time and more often than not, leave the reader both surprised and delighted.  No easy feat.  At the same time, because the book is so packed with stories, a true sense of the times emerges from the pages enveloping the reader taking them on a nostalgic journey back to an American landscape that can only be remembered in such pieces.  And throughout, Beckman’s background in music, especially the vibrancy of New Orleans jazz, is often the spiritual background to his cautionary yarns about desperate men and women struggling to survive in a bleak and desolate world.
Here is a sniveling coward bitten by a rattlesnake facing his own demise with joy, a walking dead man with a hole in his head, a musician being hunted by death itself, a cop after the punk who killed his wife and a husband who believes his devoted wife is about to murder him for absolutely no other reason than to simply do him in.  These are a small sampling of the unique characters that populate Charles Beckman’s fiction and once you’ve met them, I doubt seriously you will ever forget them.  There is a true humanity to these tales that seeks to uncover the good in even the worst of people and thus leaves the reader with a poignant optimistic hope for the future.
“Suspense, Suspicion & Shockers,” is a genuine treasure trove of great pulp fiction by one of the best writers to ever tap his fingers over the keys of a mechanical typewriter.  There was magic in those fingers and it awaits you in this book.
PS – My copy arrived autographed. 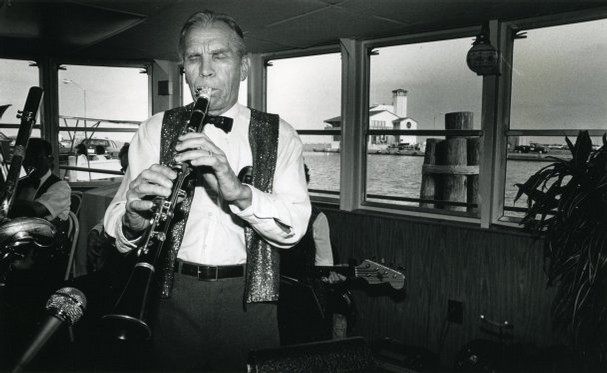 TIPPIN’ HANCOCK’S HAT-Reviews of All Things Pulp by Tommy Hancock
SUSPENSE, SUSPICION & SHOCKERS
By Charles Beckman Jr.
Von Boeckman Fiction Factory Publications
Every time I sit down to read a story with the New Pulp label attached to it or one that I just categorize as New Pulp, there’s always a thought that runs through my head.  How will it measure up, I ask myself, to those who came before…those who left us the legacy of Pulp?  When I write, that judgment is even harsher?  Even though I’m not necessarily trying to emulate Dent, Gibson, and the others who made Pulp what it was to me as a young fan, I do, as I put words to paper, think about the Pulp masters who came before…
And now, there’s a new name that’ll be added to that list every time I do it.
Charles Boeckman.
SUSPENSE, SUSPICION, & SHOCKERS is a book published by Boeckman, with assistance from his wife Patti, containing stories ranging from 1945 to 1975, tales that saw printed life in Pulp magazines and digest mags like Alfred Hitchcock, one even being picked up by Screen Gems for a television show.   Billed often as Charles Beckman Jr., this now 91 year old author recently learned that there were still indeed readers and fans, not to mention creators, who collected, discussed, and found inspiration in the Pulp tales of the Past.   Tales just like the 24 he wrote that make up this collection.
Boeckman’s work appeared in a who’s who of classic magazines- Alfred Hitchcock, All- Story Detective, Pursuit, Detective Tales, Dime Detective, Manhunt, and more.  Just as varied as the titles carrying his tales are the stories themselves-ranging from horror to crime to straight mystery to music inspired mayhem.   Drawing on his background as a jazz musician as well as his love for traveling, the author carries his readers through the back alleys of Corpus Christi, down the blues filled streets of New Orleans, to the arid land of Texas, and all around the country, following gangsters, murderers, molls, and ne’er do wells on their way.
Boeckman writes with a starkness, a reality, that wasn’t present very much in the work of most of his contemporaries.  His characters are flawed, many addicted to something, be it marijuana or music, and they make mistakes.   Boeckman also, however, reflects the one wonderful aspect all humanity shares.   That even in the darkest hour, when all hope is lost, a blackened soul might just reach out for the light and do one good thing in an otherwise worthless life.  Simultaneously, Boeckman’s work is dark and moody while also being hopeful and even at times, when you look really hard in the shadows for it, light hearted.
Another appealing aspect of Boeckman’s SUSPENSE, SUSPICION, & SHOCKERS is the characters themselves.   With all the reading I do of both new and classic stories, I find many I enjoy, but not so many that truly inspire, that make me want to read more of what doesn’t exist, to up my game in ways I can’t understand.   When you meet Boeckman’s Big Lip, Johnny Nickle, Michael OShean, and other citizens that populate this fantastic collection, you’ll know what I mean, especially if you’re an avid Pulp fan and/or creator.
FIVE OUT FIVE TIPS OF THE HAT- SUSPENSE, SUSPICION, & SHOCKERS by Charles Boeckman, often billed as Charles Beckman, Jr. and published by Boeckman and his wife is a must have for any true Pulp fan…or Crime Fan…or anyone who can read.  Definitely in the top three of books I’ve ever tipped my hat to.
Share