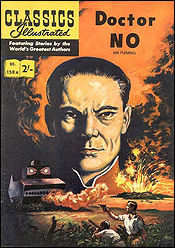 Unless you haven’t been paying your electric bill, you probably are aware that the first James Bond movie, Doctor No, was released a half-century ago this week. You might not be as aware that several months earlier DC Comics released the comic book adaptation as part of its Showcase series. Editor George Kashdan said he didn’t understand why DC picked up the book except for the fact that the artwork was in hand and the rights must have been cheap.

Several months before that, the people who actually produced the comic book – Classics Illustrated’s British division – released the adaptation as issue 158A of their series. This explains why DC’s comic had the look and feel of a Classics Illustrated title. Just to complicate matters, Dell Publishing released Doctor No in Europe as an issue of its Detective Stories title.

At the time, I couldn’t care less. I was an 11-year old comics fan and, like most my ilk, a voracious reader. The Showcase issue had a text piece that discussed Ian Fleming and his super-spy creation. The next time my parents schlepped me out to Marshall Field’s department store I sought out the paperback novels only to discover they cost an unheard of 50¢ apiece. Most paperbacks were 35¢, some were still 25¢. I reluctantly passed, but I kept an eye out for the movie. I almost forgot about it when Doctor No finally came out.

Like an amazingly high percentage of baby boomer men and near-adolescents, James Bond was the coolest guy I’d ever seen on the big screen, and I immediately became a fan. By now I was actually 12 and able to afford a 50¢ paperback, but I couldn’t find Fleming’s Doctor No. I settled for Live and Let Die, and I was enthralled.

Over the next several years I devoured every Fleming novel, even reading the new ones as they were serialized in Playboy (I looked a bit older than my age, particularly if I didn’t buy it along with my week’s comics). I was in line for the debut of every subsequent movie, and I followed the James Bond newspaper strip in the Chicago American. The latter was a British strip that quite faithfully adapted Fleming’s books, and in my mind most of those adaptations were better than the books themselves. Here’s a fun fact: Modesty Blaise creator Peter O’Donnell wrote the Doctor No adaptation. But I wondered why DC didn’t do any more adaptations.

So did Carmine Infantino when he became publisher. In 1972 he discovered DC had a ten-year option on Bond, and that option was about to run its course. He approached Jack Kirby and his old pal Alex Toth and probably others, but then something terrible happened: Sean Connery announced he was quitting the series. Carmine let the option expire.

Clearly, DC would have made a fortune off of 007 had they picked up the series when the second Bond movie was made. Or even the third, Goldfinger, which truly launched the mega-fad. But the company was starting to doll itself up for a sale and the folks in the trenches were busy with the imminent launch of the Batman teevee series.

Perhaps the most popular heroic fantasy figure in movie history, James Bond never achieved an on-going comic book series. Many movies were adapted, some by guys like Mike Grell, Tom Yeates, and Howard Chaykin. A handful of original mini-series and one-shots were released, but nothing more.

The movie series went on and on and on, but most Roger Moore entries were more reminiscent of Adam West than of Sean Connery. The series started to improve after Sir Roger outgrew the part and Barbara Broccoli took over as producer, and Daniel Craig’s reboot in 2006 brought new hope and great entertainment to the masses. As Adele fans know all too well, the next Craig Bond flick, Skyfall, comes out in a few weeks.

But I got to tell you, as a baby boomer Bond boy, I feel greatly cheated.