Is the world ready for a female Doctor (Who)? 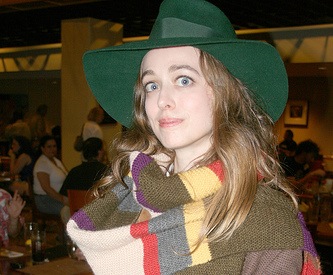 As far back as when Tom Baker announced he was leaving the title role of Doctor Who, and at every period of transference since, tabloids would float the “rumor” (a word which here means “collection of words concocted out of thin air”) that the new Doctor might be a woman.  And with it would come the requisite shaking of heads and rending of garments, not to mention the follow-up news articles with headlines that all circled around “Nurse Who?” and the like.  People associated with the show, if ever actually asked, would rarely deny such stories, because as soon as you do that, the publicity train stops, and who wants that?  So we get an infuriating round of winks and “You never know”s and another cycle of articles from people on both sides explaining why either it could or should never happen, or that not only should it happen, but the time is right.

It’s a question that couldn’t be rationally asked about almost any other fictional character.  You can swap stars and characters out of a show – the longer a show goes, the easier it becomes.  M*A*S*H, CSI, the list goes on. You can even re-cast main characters; James Bond has gone through a half-dozen changes already. But to suddenly turn a well-known male character for a female (or vice-versa) would normally be ridiculous.  But in the world of science-fiction, anything can happen.

One of the sublime wonders of The Doctor is his ability to regenerate – to completely change his form, his personality, and most importantly, the actor playing him.  It’s what’s allowed the show to continue for going on fifty years, changing tone and direction with each change of main actor.  And with each change, a growing part of the audience asks the question that Chris Claremont used to ask so often when creating comic characters; “Is there any reason this character can’t be a woman?”

The simple answer is no.  When Matt Smith took the role, as the Doctor did a quick anatomical inventory, he felt his long hair and thought for a moment he’d regenerated into a female.  A couple years later, Neil Gaiman set the concept in stone – he created The Corsair, another renegade Time Lord whom The Doctor knew very well.  He described him as a “A good man… a couple of times a good woman”. So there it is, a Time Lord can change their gender during regeneration. You gonna argue with Neil Gaiman, cause I’m not.

The current Doctor, Matt Smith, while assuring us that’s he’s not going anywhere anytime soon (and quite right too, IMHO) has gone on record that he thinks there’s any number of actresses who would make a fine Doctor.  In an interview with The Mary Sue, he named Charlize Theron specifically.  Late last year, Helen Mirren famously announced that she’d love to play the role as well.

Some people forget that showrunner and Twitter-bailer Steven Moffat has ALREADY brought us a female Doctor.  In his Comic Relief story The Curse of Fatal Death, after burning through a staggering number of regenerations, The Doctor finally stands as Joanna Lumley, co-star of Absolutely Fabulous (and for those of us who care to show their age, Sapphire and Steel and The New Avengers). Yes, it was a comedy adventure, and out of continuity (I assume), but the moon did not fall from the sky when it happened.

So we’ve got the “can” out of the way.  We now advance to the more complicated question…should he? The show has been amazingly good about representing same-sex relationships.  From the beginning of the new series we’ve seen numerous characters in various “non-traditional” pairings, all portrayed as being spectacularly unimportant to the plot.  The underlying message, if one had to spell it out is “There are a lot of the people in the universe, and some of the like men, and some of them like women, and it doesn’t make them any more good or bad as people.”  So surely making the main character a woman would make that message even more powerful – it doesn’t matter if you’re a man or a woman, you can still make an amazing difference in the world.

Of the people who argue against such a change, the arguments tend to circle around a small number of talking points.

YOU’RE JUST TRYING TO MAKE A STATEMENT Sadly, no matter how good an actress they would find, no matter how good the stories, there would absolutely be a part of the audience who would insist that the only reason the change was done for some socially-motivated reason, likely involving the phrase “Political Correctness.”  It’s the same argument made in comics when a character is brought back as a new gender, ethnicity, lifestyle, etc.  The argument seems to rule out the idea that the new/changed character could possibly be good, based on that ulterior motive.  Any storyline or even dramatic moment that involves something unique about being that type of person is quickly pointed at as “proof” that the character exists solely to further the various agandae of that group, and any other group they can associate them to.

There’s an inherent issue with this argument, in that it suggests an attempt to diversify the types of characters out there must by definition be based on “cramming them down our throats” and not simply an attempt to show that there are more types of people out there, some bumpier than others. It can be tempting to make those characters ciphers for getting a writer’s pet viewpoints across, yes, and when proselytizing takes precedence over entertainment, the show can suffer. But considering how well the show has already brought alternate partnerships in with no massive shift in tone, I suspect this issue would not be a problem.

THAT’S NOT WHO HE IS The character has been a man for almost five decades – he sees himself as male, his friends, the universe in general see him as such.  For him to become female is too large and fundamental change to the character, one that the characters in the narrative world, and certain the ones in the real world, could not accept.  This is more an argument based on tradition than anything else, a general sense of what the character “is”, and an attempt to change that is more than they wish to stand.

It’s rather like “New Coke Syndrome” – when the soda chose to change its recipe, they experienced a pushback from the public far more than they’d expected.  It wasn’t a problem with the taste – indeed the new formula tested better than the original.  It was a basic resistance to a change to something people knew, and simply expected to be there.  People who hadn’t drunk Coke in years were coming out against it.  They realized it wasn’t the soda people were coming out for, but the memory of it, the way it affected their lives.

The people who make this point would likely be as against the idea of making The Doctor an American, or if they chose to change the look of the TARDIS.  It’s BEEN that particular thing for so long, that to suggest it be changed is simply unthinkable.

IT’D CHANGE TOO MUCH Smith very cogently pointed out in the aforementioned interview that a female Doctor would result in a dynamic change in how he (she) interacts with the world.  “It would change the role,” he explains, “because she would be a woman so when you put her in a room full of men, it’s a different scenario than if you put a man in a room full of men, because she’s a different sex.”  This is not, I believe, necessarily a bad thing.  It could very definitely challenge the writers to find ways to combat that mindset with the people she meets, or result in creating a character so strong and forceful that she just takes control of a room so quickly, the question of “who the heck are you?” tends to get forgotten. Indeed, that’s exactly how the character works now.

BOYS DON’T WATCH SHOWS WITH GIRLS IN It’s an old chestnut, but it’s been stated as gospel since time immemorial, and no matter how many examples disprove it (where my bronies at?) it’s seen as an inarguable fact by marketing and programming executives alike. The idea is that young boys (the primary audience of the series) will “only” watch a show with a male lead, in the same way girls “only” watch shows with a girl lead, preferably wearing a tutu, and with a talking lhasa apso as a sidekick.  Of course the problem is, Doctor Who is a show with very strong female characters, sometimes stronger than the male ones, and it doesn’t seem to have affected the audience much at all.

From a narrative and social point of view, there’s very little that seems to be stopping such a move.  Sadly, the real reason we likely won’t see such a change is based simply in money.  Change is risky, and the larger the change, the greater the risk.  Switching to a female lead would be quite risky indeed.  No matter how questionably valid each of the above arguments are, they are all held by some people, and likely Auntie Beeb have a better idea of how many than anyone outside of Television centre ever could.  And they likely have good estimates on what sort of an effect such a change could have on the audience, and until their research shows it’ll have almost no negative effect at al, we’ll not see such a dramatic move made.

Odds are it’ll happen someday, if the show stays on long enough.  And odds are there will be a hue and cry, and everyone will tune in, just to see what happens.  And in a perfect world, they’ll be so impressed that they’ll be back the next week.  And who knows, someday we might be reading articles on whether or not it’ll make sense to to switch back to a male character.