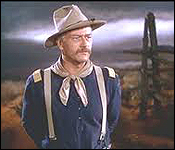 Movies are full of great lines and memorable quotes. Some are even wise and insightful, but some are just filled with stupid wisdom. I have in mind John Wayne’s line in John Ford’s 1949 western classic She Wore A Yellow Ribbon: “Never apologize and never explain – it’s a sign of weakness.”

It sounds great and even may make sense within the context of the story; Wayne’s character is a military commander and the troops need to obey the commanding officer without question so apologies and explanations could interfere with that. Unfortunately, some people take it out of context and take it literally and try to apply it to everyday life.

I have in mind the GOP and Mitt Romney over the past few weeks. The candidate shoots from the lip about the death of our ambassador in Libya in order to score political points. He gets his facts wrong. Then a surreptitiously filmed video made at a $50,000 a plate fundraiser for Romney held in Boca Raton emerges. In it, among other things, he dismisses 47% of the electorate as lazy and dependent on the government and says they will never vote for him. If you missed it, you can see it here.

The best “explanation” Romney made on the latter was that he phrased it “inelegantly.” Someone in the GOP camp has taken John Wayne’s movie wisdom very much to heart: never apologize, never explain. It’s a sign of weakness. The title to Romney’s 2010 book is “No Apology.” It’s also part of what appears to be the GOP strategy: attack, attack, attack. They’ve also taken to heart a line from the movie Patton: ‘We’re gonna keep fighting. Is that clear? We’re gonna attack all night, we’re gonna attack tomorrow morning. If we are not victorious, let no man come back alive!”

To my mind, that’s the problem. Your opponent is not just a political opponent; they have become the enemy who must be vanquished at all costs. These political operatives engage in a political equivalent of a scorched earth policy. Anything that might be of use to the opponent must be destroyed by any means possible.

Last week, the Veterans Jobs Corp Act of 2012 failed to pass in the Senate. The GOP justification for it was that they didn’t feel it was properly funded; the war that put these soldiers in harm’s way and that the GOP okayed was also not properly funded but that was all right. The GOP also kept up their filibuster that prevented Obama’s $447 billion dollar jobs program from even reaching a vote.

The basic reason for both failures is that the GOP doesn’t want anything that might reflect well on President Obama this close to the election. Never mind that veterans might benefit, never mind that ordinary middle class citizens might benefit, the key was to make sure that the President didn’t benefit. The GOP announced four years ago that they intended to do everything they could to make Barack Obama a one term president and they have worked hard at it. They will never apologize for that because, to them, that would be a sign of weakness, as would compromise.

Except – apologies are not a weakness. No person and no nation is 100% correct 100% of the time. When you have done or said something wrong, the brave thing, the strong thing, is to apologize for what you’ve done wrong. Ali McGraw’s character in Love Story famously said, “Love means never having to say you’re sorry.” Anyone who has been in love, who has been in a relationship, knows this is another bit of stupid wisdom. If you’re stubborn, if you have to be always right, then good luck to you and that relationship. The political equivalent seems to be “Politics means never having to say you’re sorry.” That’s also boneheaded.

Look, I’m not naïve. I was raised in Chicago and I know how rough and tumble a game politics can be. I understand that, if you don’t get elected, you can’t institute any of the changes or programs that you think would be good for the citizens of this country. However, if your only goal is to get elected, to beat the opponent by any means necessary, then you have no program, you have no vision, for this country other than winning. All you’re going to have is the next election and you’ve provided the next opponent with the game plan and blueprint for how to conduct it – win by any means necessary. All you can then do is keep fighting and governing falls by the wayside.

Everyone makes mistakes. I have my own thoughts and beliefs that I try to put into practice but I never assume they were written on tablets of stone and handed down to me by a deity. I do the best I can and, when I’m wrong and see that I’m wrong, I try to apologize. I’m not as good at it as I should be. I do, however, approach things with the possibility that I could be wrong and a philosophy of never apologizing, never explaining, attack attack attack, does not allow for that possibility. And that’s why, in my opinion, it’s stupid wisdom.

To quote Dennis Miller back when he was more sane, “I could be wrong. . . but I doubt it.”