Summer’s singing its last karaoke and the flash mobs of Gangnam Style have come and gone for the nonce. But back-to-school, be ye student or mentor, doesn’t have to mean the fun’s over—just shifting gears. So let’s go to Tampa with Gina, BF Bobby, and her vamped-up posse for adventure #3 in Lucienne Diver’s [[[Fangtastic]]] (Flux, trade paperback, $9.95/$11.50 Canada, $3.44 Kindle, ages 12 & up, Jan. 2012). Wassup? A lot. Heat, humidity, steampunk geeks, government spooks gone…well…even more spooky, death, mayhem—and vampires, of course! Pretty much Buffy on X—so Diver maintains her signature style. The first in the series is still my fav, and I’m not feeling that Tampa plays a crucial role in this story (could be any hot city), but those are minor points in what is otherwise another successful outing full of chic twists and turns that keep things entertaining. I may not always agree on a few details of how she gets there, but I like where she’s taking the series. The focus here is the steampunk club scene full of wannabe vamps and the Feds assign Gina and her crew to infiltrate the true vamps who run the clubs behind-the-scenes so she can investigate a string of club kids murders—but who’re the real big bads? Gina’s really beginning to wonder and doesn’t like what she finds out along the way and she does something about it. This is Gina coming more into her vampy own and raising the stakes (pun sort of unintended…wink) and Diver doing some deeper world building with lots of bells-n-whistles, new minions, and the addition of some surprise superpowers—with which I’m not yet entirely on-board, but I’ll roll with it through next book. There is enough grit and wit in this installment to keep adults engaged, as well as plugged-in co-eds. So take a fabulous spin. And stay tuned for book #4, Fangtabulous, come January, just in time for winter break. 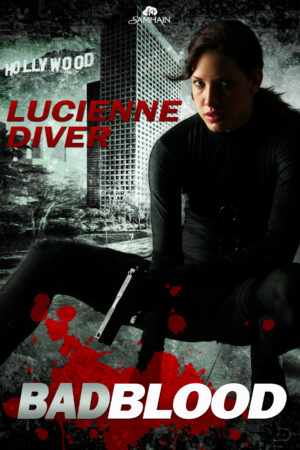 When you’re done clubbing with the kids in Tampa, how about a romantic trip to the beach, the spa—the police station with hot Detective Armani!—with a few gods and goddesses in LA? This is where Diver’s adult urban fantasy romance based upon mythical characters comes to life in [[[Bad Blood]]] (Samhain, $14 trade paperback, $7.96 Kindle, June 2012). And her typically sharp and snarky voice is in full evidence here, but darker than in her Vamped series and with a bit more romantic spice, and appropriately so for the mature audience this is aimed at—right between the eyes. Here we’ve got a freakshow family that is, literally, part circus and part PIs, and the newest working gal, since her Uncle Christos’ disappearance, Tori Karacis, is up to her eyeballs in murder, gore, silicon starlets, Circe, Apollo, Hermes, Hephaestus, mermen, perhaps even Zeus and Poseidon, and a whole lotta WTF?! It is Hollyweird, after all. Blood is thicker than muck, so it seems. And, of course, the bad guys cheat!  But I won’t serve up any spoilers save that this all adds up to impending California style DOOM! Let’s just say that the tale contains the typically hot tidbits of the tough gal’s softer side and her having to choose between two impossibly hot men who totally want her, of course (I did say fantasy) and who are competitive with each other, plus wacky grandma Yiayia over the phone—the only family member who actually makes a sort-of appearance besides quirky quotes at the head of each chapter, which is sort of disappointing. And you don’t really see much of Tori’s circus skills—hope that’s remedied in subsequent books in the series. Those complaints aside, it’s an amusing ride with all the romance tropes to keep those genre fans happy, enough who-done-it on the frothy side to keep the mystery fans engaged, and of course there are the supernaturals to hook the fantasy crowd – everyone’s invited to the party and the Tarrantino-level fantabulous ending! The entertainment? It’s all in the blood, natch! Crazy in the Blood ($4.24 Kindle…in print 2013)…next in the series.