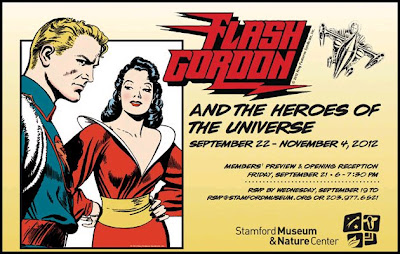 The Stamford Museum & Nature Center in Stamford, Connecticut has announced that it is hosting an exhibit called Flash Gordon and the Heroes of the Universe from September 22 – November 4, 2012.

About Flash Gordon and the Heroes of the Universe:
Flash Gordon and the Heroes of the Universe showcases artwork by two of the finest Flash Gordon illustrators, Alex Raymond and Al Williamson, as well as numerous other science fiction cartoonists. The artwork and memorabilia on display, representing space adventure creations from Buck Rogers to Star Wars, provides evidence of the significant impact that these heroes of the universe have had on American culture. Flash Gordon, which first appeared in 1934, was created by Alex Raymond (New Rochelle, 1909 – Stamford, 1956) and has impacted countless science fiction creators including George Lucas, director of “Star Wars.” Lucas claims, “Had it not been for Alex Raymond and Flash Gordon, there might not have been a Star Wars.”

One of the most influential artists in the history of his genre, Raymond is credited with having created “the visual standard by which all such comic strips would henceforth be measured.” The exhibition will also include original artwork by Al Williamson, who continued Raymond’s creation and put his own imprint on the way the character was drawn and presented. Writer and cartoonist Brian Walker, who served as curator for Fifty Years of Bailey Bailey at the Museum in 2001, is serving as the guest curator for this exhibition. He has been the curator of more than seventy exhibitions and is the author of numerous books on cartoon history.

Flash Gordon and the Heroes of the Universe is made possible, in part, by support from King Features Syndicate, A Unit of Hearst Corporation, as well as the annual support of Premier Partners: Aquarion Water Company, First County Bank and Purdue Pharma. The Stamford Museum & Nature Center would like to thank Cori Williamson, Peter Maresca, Jim Keefe, Bill Janocha, Steve Kammer, Bob Fujitani, Brian Walker and the Strong Museum for lending artwork and artifacts to this exhibition.

About the Stamford Museum & Nature Center:
Stamford Museum & Nature Center is a 501(c) (3) not-for-profit organization dedicated to the preservation and interpretation of art, the natural and agricultural sciences, and history. The Museum is a vital cultural and educational resource for the community, and a focal point for family activity and interaction, seeking to inspire creativity, foster self-discovery, and nurture an appreciation for lifelong learning through exhibitions, educational programs, and special events that enhance the visitor’s experience of our unique site.

Learn more about the Stamford Museum & Nature Center at http://stamfordmuseum.org.

If you stop by the exhibit, tell them All Pulp sent ya!