BLOOD OF THE CENTIPEDE Debuts from Pro Se ! 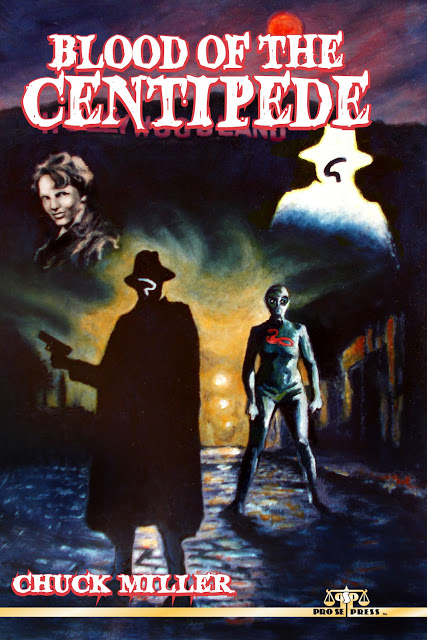 Pro Se Productions, a leading New Pulp Publisher, announces the debut today of the second novel from author Chuck Miller featuring his hit breakout character from 2011, The Black Centipede!
BLOOD OF THE CENTIPEDE features one of New Pulp’s strangest and most popular heroes as he returns to full length prose!   From The Casebook of the mysterious BLACK CENTIPEDE, the true story of his adventures in Hollywood while filming the 1930s classic BLOOD OF THE CENTIPEDE! Chuck Miller, hand picked biographer of the Black Centipede finally tells a tale that involves Amelia Earhart, William Randolph Hearst, ‘Fatty’ Arbuckle, and Los Angeles’ own masked vigilante- The Blue Candiru- in an adventure stranger than anything that happened on the big screen! Plus, in the Centipede’s own words, his first encounter with the enigmatic WHITE CENTIPEDE!
“Pro Se,” stated Tommy Hancock, Partner in and Editor in Chief of Pro Se, “is more than tickled to announce the release of BLOOD OF THE CENTIPEDE.  Very few characters so new to New Pulp have had the impact or left the impression Chuck’s Centipede has.  Combine that with Chuck’s relentless devotion to the character and the tales built around him and this is a definite winner for Pro Se and New Pulp fans of all types!
With stunning cover art by David L. Russell and eye catching design and back cover art by Sean Ali, BLOOD OF THE CENTIPEDE is the second Centipede novel from the wonderfully twisted imagination of Chuck Miller! Psychedelic Pulp at its best! From Pro Se Press! Puttin’ The Monthly Back Into Pulp!
BLOOD OF THE CENTIPEDE is now available on Amazon at http://tinyurl.com/8lyvo5band in Pro Se’s own Store at http://tinyurl.com/99flcpafor $15.00! And coming soon as an ebook to all formats!
BLOOD OF THE CENTIPEDE also features a special offer from Radio Archives! Don’t miss it!