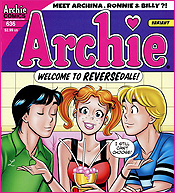 I have reported here and elsewhere about the goings-on at Archie Comics. While DC keeps on hitting the reset button like a monkey in a crack experiment, and Marvel keeps on doing endless – literally endless – mega-events, Archie has been slowly making history.

In the past several years they’ve added a major gay character and they’ve had Archie fall in love (on the cover, no less) with a black woman. They’ve taken ongoing looks into the potential futures of their characters, which plays against the assumptions held by our culture for more than 70 years. They’ve tried to make Riverdale look and feel more like the real world: even the hallowed Pop Tate’s has had to endure competition by national fast food chains. Archie Comics continues to be the major force in entertaining each next generation of comics readers; without their efforts and similar, but smaller, endeavors by Boom!, Bongo and others, we would have no future readers for the graphic novels published by Fantagraphics and Abrams.

And, I’m happy to report, now Archie Comics is just getting weird.

In Archie #636 (the alternate cover is shown here; the newsstand cover is done in sort of a traditional 1950s Archie style), the current issue, the Riverdale gang swap sexes. Yep, the boys become girls and the girls become boys. This doesn’t happen voluntarily; Sabrina the Teenage Witch has a snarky cat who casts a spell so that the kids can see things from the other side of the gender bend. Hilarity ensues, and the point is made. Two points, if one wants to infer a warning about the dangers of catnip.

Mind you, I like weird. Weird is the antidote to boring. It’s the elixir that promotes experimentation and new story concepts. But I doubt Archie, Betty, Veronica, Jughead and Reggie will be getting permanent sex change operations any time soon.

Mister Weatherbee… Well, I’m not so sure.