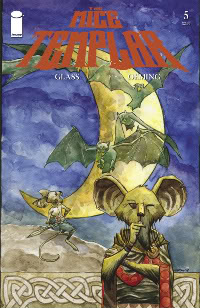 A couple disappointments and a near no-show from DC aside, this was a pretty good week in comics, especially outside of the mainstream superheroes.

Still, this week more than anything is just a little whisper, as all eyes are on San Diego for next week’s Comic-Con. All the same, books came out, so on to the reviews…

Book of the Week: Mice Templar #5

— This series started out as a fairly typical fantasy story, albeit told with mice and featuring a violent edge.

Last issue, it started becoming clear that writer Bryan J.L. Glass was veering away from the expected route of the young protagonist realizing his great destiny and triumphing over evil.

This issue, any and all signs of the archetypal fantasy narrative have been thrown clear out the door. Paradigms change in a big way for Karic, and to write anything about it would be to spoil the fun.

Mike Oeming is once again top-notch on art, and really the only question left is how many times the creative team can keep raising the bar.

and Ghost Rider #25 — Marvel had two superhero winners this week, with very different very good issues. Ghost Rider starts out slow, continuing the retrospective storyline of Johnny Blaze in jail. Zadkiel’s manipulations continue, and things build to a hellacious conclusion, highlighted by Blaze literally using the Bible as a weapon. Only Jason Aaron could make that work.

Cap sees the big fight between Bucky and the new impostor (the old Nomad), but the real bout to watch is that between Sharon and the Red Skull’s daughter. Ed Brubaker uses his skil with pacing to tell both stories at once, using each to heighten the drama of the other. And the ending? An out-and-out punch in the stomach moment.

Omega the Unknown #10 — The weirdest Marvel series in a good, long while finally ends, with Jonathan Lethem and Farel Dalrymple taking a bow with a nearless wordless denouement that comes straight out of David Lynch’s oddball mind. It’s a fitting conclusion to the series, which was enigmatic for the whole trip.

— Another laid-back issue, as Big and Merrow venture off for some R&R and the team continues to regroup. But the peace won’t last, with the Mothmen on the warpath. This series is just as good as B.P.R.D.

, though with another couple dashes of whimsy.

— We finally get the background on how the Skrulls switched out Elektra, and Brian Michael Bendis is really sharp once again. Still, it’s the same song with a different dancer, and Bendis continues to be coy on whether the Skrulls are killing off the heroes.

— IDW begins publishing the Web phenomenon with this issue, and while it’s not the most imaginative story (a kid goes on fantasy adventures in his dreams), it’s well-done and translates well to the new medium. Recommended, especially for younger readers.

— The new series starts as a Conan history lesson, and while it’s solid top to bottom, there’s nothing especially noteworthy. Also, Richard Corben’s art (only in part of the issue) isn’t a great fit for the tone of the book.

Batgirl #1 — Yet another first issue. This one begins with stereotypical hero narration that leads into a big splash page of the hero jumping at two bad guys, one of whom yells, "Batgirl!" The always-good Adam Beechen does a fine enough job, but there’s nothing here that hasn’t been seen before a million times in a million other superhero comics.

— Things start out on a surprisingly somber tone, but quickly enough the gears shift back to the usual silliness. That inconsistency mars what’s otherwise a fine issue, as the funny moments suffer from the seriousness, and the drama loses steam to the jokes.

Checkmate #28 — Giant warthog monsters? Um, no thanks. I’m proud of myself for getting through five pages of this crap.

— After two good issues of this mini, this one falls flat. There’s not a shred of anything new: Poison Ivy’s still bad.

— Man, it pains me to write this, but after Peter David’s great series finally got back on track after the last X-Men crossover, now Skrullapalooza is tripping up all that momentum. This is the first bad issue of the series to date.

There’s a random Skrull thrown into the mix, and maybe it’s just the horrible art this issue, but it’s impossible to tell who’s who, and not in a good way. And as cool as it is to see Darwin show up, he brought along Long Shot. Long Shot!