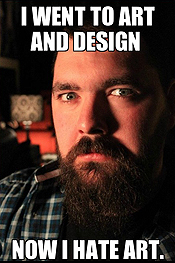 A&D is the way my fellow classmates refer to the high school we attended, The High School of Art and Design in New York City. A&D is without a doubt the greatest high school on earth.

Fame was the story of the High School of Performing Arts, or as they referred to it in the film, P.A. I have to admit I really liked the film but P.A. can still kiss my ass.

I won’t bore you with the list of bad ass comic book and other artists that graduated from A&D but it’s as impressive as shit. Check out this link if you care to know just how A&D rolls.

I’m not writing this just to brag about A&D and put down our rivals, I’m writing this because the arts in this country are under serious attack. The GOP is threatening to pull funding from art programs like the National Endowment Of the Arts and the first thing cut in any high school budget are the music and art programs.

What kind of goddamn country would this be without art? What kind of comics will there be in a generation if comic artists don’t have places like A&D to attend? Like I said, all of the high schools I mentioned are in New York City.

New York leads the world in the arts. Coincidence? I don’t think so.

America needs and quite frankly wants the arts. The mega popular show, America’s Got Talent, had two – that’s two – artists in the finals.

If the comic book and related industries just turn a blind eye to the assault on the arts then we will get what we deserve. That’s work that sucks and leads to a continuing declining fan base and the death of comics.

Lastly, I’m sure you know I did not mean all the rude things I said about the rivals of A&D. They are great schools and I have nothing but respect for them. In case anyone is wondering I did my undergrad work at The Pratt Institute and I’d just like to say, fuck Cooper Union, the School of Visual Arts, Parsons and a special fuck you to Art Center.