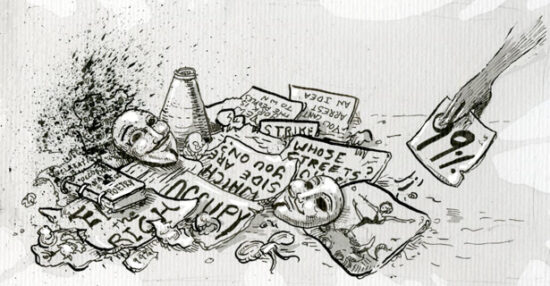 Congress shall make no law respecting an establishment of religion, or prohibiting the free exercise thereof; or abridging the freedom of speech, or of the press; or the right of the people peaceably to assemble, and to petition the Government for a redress of grievances.

We mention this because earlier today, comic book artist Molly Crabapple (that’s her artwork above, previously published in The Nation) peaceably assembled on the streets of New York City for the anniversary of the Occupy Wall Street movement. Apparently, the NYPD insisted everyone get on the pavement, and once they were on the pavement they were arrested.

Molly live-tweeted her arrest on her Twitter account. Warren Ellis started the hashtag #FreeMollyCrabapple, which rapidly became a trending topic on Twitter, and was covered by numerous news outlets. And this evening, Ms. Crabapple was released.

We’re sure she’ll have much more to say later. For now, we’re just happy she’s out.

Apropos of nothing, have you contributed to the Comic Book Legal Defense Fund lately?