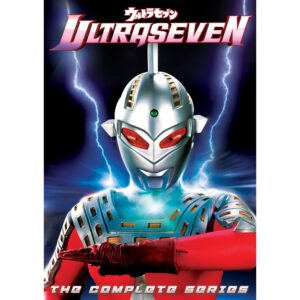 HenshinJustice.com reports that Shout Factory will release the second series in the legendary Ultraman franchise, Ultraseven on DVD in time for Christmas.

The eponymous hero, from The Land Of Light in the mysterious Nebula M-78, visits Earth and is fascinated by its creatures, especially humans. Taking the visage of a man he saved from a climbing accident, he pledges himself to protecting the world from various aliens and monsters that plague it.  Taking the name “Dan Moroboshi”, he works with the human military force the Ultra Garrison, and unbeknownst to them, fights the monsters hand-to-hand in his giant form.

The series, the first of many sequels to Ultraman, was first broadcast in Japan in 1967.  Ted Turner’s syndication company originally planned to dub the series into English back in 1985, the project was not completed and broadcast until 1994 on their cable channel TNT.  Not all episodes were completed, and while the adaptation was fairly well done and not “camped up” in any way, there were some edits to some episodes for tone and violence. One episode, “Crystallized Corpuscles” was banned entirely, and never broadcast.

At this date, it’s not been specified if the episodes will be the uncut Japanese originals, or if they will feature English subtitles or the TNT dubbed soundtrack.  Watch this proverbial space for more detail.

Amazon has already listed the set (ahead of Shout’s official announcement) as being released December 11th, with a price of $34.98, already nicely discounted from its list price of $49.97.