Dennis O’Neil: Have A Heart 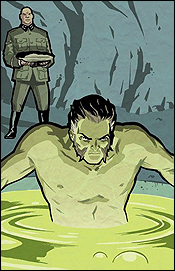 Tomorrow (as I write this) is the big day, a day as important as my birthday and for a similar reason, and yet I don’t know how to celebrate it. I don’t even know what to call it. “Lazarus Day?” That’s certainly appropriate, but it carries some lumpy baggage. “Resurrection Day?” Same problem: “resurrection” has acquired connotations I’d rather avoid.

Why the fuss over a rather undistinguished September Monday? Why do I think it deserves special notice? Well, for you, it probably doesn’t, but for me? Ten years ago, on September 10, 2002, while having lunch with Mia Wolff and her son Virgil at a restaurant in Piermont, New York, I fell off the chair and lay dead on the floor. According to Mia, I’d been talking about the afterlife and my lack of faith in it when I went down. She thought I was trying to be funny. But after a while, she looked at me and knew something was very wrong. Her call for help was answered by the restaurant’s owner, John Ingallinera, whose other job was being a New Jersey fireman. John could identify a corpse when he saw one and he knew that next door there was a portable defibrillator. He ran to get it, and with the help of Lizzie Fagan, Michael O’Shea and Bryan Holihan, put the paddles on my chest and pressed the button – three presses – and then my heart was beating and the paramedics had arrived.

I was laying in an unfamiliar bed and Marifran was leaning over me, asking if I knew what had happened to me. I didn’t and so she told me. The rest went by the book: western medicine is superb at certain tasks, and cardiac surgery is one of them. A short stay in a local hospital, an ambulance ride across the Hudson to another hospital, doctors, tests, a trip to an operating room on a gurney and… some cool looking scars and recovery.

Anything special happened while my cooling self was cluttering up John’s floor (and probably playing hell with his lunch business)? Nope. No bright light at the end of a tunnel, no disembodied entities hovering around, no long deceased relatives welcoming me to the Other Side. Just: sitting in a restaurant/lying in a hospital. Like a splice in a film.

Marifran says that maybe I had to be a believer before I could see what believers see. Okay, so we’re dealing with an economy size Catch 22 here. I can’t get the evidence I require to believe something unless I already believe it?

All right, then did the experience change me? Transform me into some kind of secular saint? Make me cherish every breath I take? I wish. But, no.

But I am grateful for these past ten, good years and I want to celebrate them. I have no memory of being born, but being reborn? A lot of that I remember and I want to cheer, to testify that, although I’m often oblivious to it, each moment is all we have.

We’ll probably think of something.