Webcomics You Should Be Reading: ‘xkcd’ 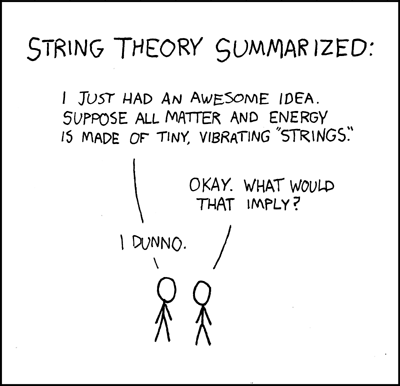 Welcome back to the article series you love to comment on (mainly because I yell out on facebook I’ll buy pizza and beer for those who comment), Webcomics You Should Be Reading! I’ve taken you, gentle reader, on a magic carpet ride through a tunnel of funny ranging from the macabre, the vulgar, the hyper-cute, to the thought-provoking-so-much-so-that-the-comment-string-ended-up-an-actual-debate. So, where do we go from there? How about we jump into the deep end of smarty-pants webcomics. That’s right, you guessed it. Dust off your mortar boards, and fire up dictionary.com… it’s time to read xkcd!

A little history then: Randall Munroe is a CNU graduate with a degree in physics. Before starting xkcd, he worked on robots at NASA’s Langley Research Center in Virginia. After scanning in some old math notes with cartoons drawn in the margins, he was linked by BoingBoing, and soon there after, the phenomenon was birthed.

Simply put, ‘xkcd’ is a webcomic for smarty pants people who enjoy their humor on the higher side of the SAT score charts. Given the breadth of vile jokes I smattered you with, I figured we needed a chance to enhance our vernaculars. The comic itself is a continuity-free mash of stick figurey with jokes that range from topics as diverse as electrical engineering to the astrophysics.  Mr. Munroe identifies the strip as being about “Romance, Sarcasm, Math, and Language”. I’ll take his word for it. Why? Cause after a day of reading through the strips, I’m certain he’s smarter than I am, and I fear debate. That being said, the strip is hilarious, and bears sharing. Let’s discuss.

The strip is as a dry as melba toast, with a wit as sharp as english cheddar. As a bonus (not unlike our host last week, who donated free avatars on her site) ‘xkcd’ will increase your vocabulary, expand your mind with it’s universal concepts, and for those who let their mouse linger over the strips, Mr. Munroe grants us a scooby snack of alt-text that enhances each strip. It’s funny, brain-enhancing, and drawn with all the skill a CNU graduate with physics should be able to muster. Alright folks… I’ve waxed poetic enough at this point… so on with the cavalcade of links!

And now a tabulation of facetious pictorialization brought to us from an astute artisan:

• On pietism
• On the lies from our progenitors
• On amicability in the presentation of filmed histrionics
• On the misplacement of amour
• On the culture of pop, by way of fabrication
• On the removal of mire from the diminutive crevices in your claviature
• On alchemy of the soul
• Ok, I tried being all smart like but here… it’s vulgar, insensitive, and wrong. And funny.

Drama: Well, maybe this strip isn’t mean to be funny, and now the fact that I was an art major in college, with a minor in creative writing shows that I’m an idiot, and in fact this strip is meant to be a dramatic representation of the world around us. Crap. I bet now you’re gonna tell me that black holes aren’t gateways to the 51 parallel universes controlled by the ancient immortal Monitors.

Continuity: There are a few multi-day strips if you peruse the archives. But really, what you get here is a collection of single strips that are generally funny. At least my math teacher thinks they are.

Art: Finally, I can sound like the smart one. Randall draws stick figures. I’m guessing cause he spent all his time “studying” and “being smart”. Well, I spent my time in college learning about depth of field, composition, line weight, value, color harmonies, and juxtaposition of compositional elements. This webcomic features none of that… but damnit, it’s still funny. In fact, the stick figures, and simple strip layouts lend to the humor, especially when lofty concepts are explored. That being said… if you like ‘xkcd’, it’s not for it’s artistic value. It’s because the writing is sharp, and the illustrations (while as crude as unrefined Castrol Syntec) get the point across well enough.

Updates: Every Monday, Wednesday, and Friday we’re treated to a world of simple humans making less than simple observations that tickle us all in the funny bone.

Risk/Reward: Ok, this strip won’t be for everyone… but when have I led you astray? I haven’t… so take a leap of faith. ‘XKCD’ is a crudely drawn, intelligently written webcomic that will catch you off guard when you least expect it. And hey, the extra alt-text one liners over each comic (just hover your mouse over the comic, and leave it alone for a seond… poof! More funny!) provide one extra laugh. Given the cost of the comic, this author has to say you won’t find a safer investment right now.

Now go forth my temperate assemblage… and cachinnate!