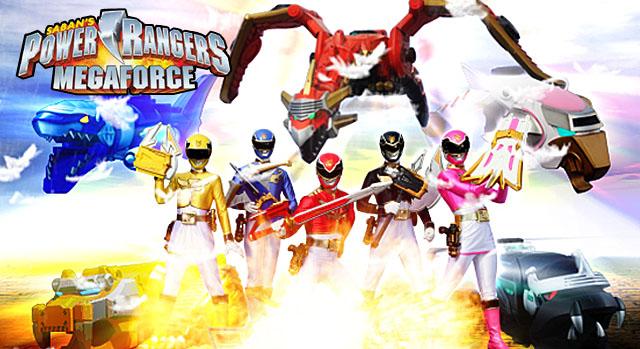 The folks at JEFusion.com shared footage from this year’s Power Morphicon of Saban Entertainment’s promo reel for next year’s Power Rangers series. Their seventeenth series, Power Rangers Megaforce, will be based on the thirty-fourth of Toei Company’s Super Sentai series, Tensou Sentai Goseiger.

Starting with the original Mighty Morphin’ Power Rangers in 1993, based on Kyōryū Sentai Zyuranger, Saban has been producing series using costumes, props and action footage from the Japanese originals.  The series have remained a perennial hit in the States, as the original series has done in Japan for the past thirty-six years.

It’s not the first time the name has appeared in entertainment either.  One of the original sentai series had “mega” in the title; Denji Sentai Megaranger, which was used to create 1998’s Power Rangers in Space. Action film fans may remember the Hal Needham directed MegaForce, starring Barry Bostwick and Persis Khambatta.  More important to the toy manufacturer side of the process, MegaForce was a line of military adventure vehicles from Kenner in 1998.  It’s assumed the trademarks for those series have already lapsed, otherwise Saban might have to pull a “Metro” and change the name (as Microsoft has been forced to for its new Windows 8 interface).

In addition to using footage from Goseiger, the new series will also be using footage from the sentai feature film, Gokaiger Goseiger Super Sentai 199 Hero Great Battle.  This was the film release for the NEXT Sentai series, Kaizoku Sentail Gokaiger, which featured a massive battle where all 35 of the sentai teams to date united to fight a massive alien threat.  However, since Megaforce is the anniversary series in America, the reunion footage will be used there.  Footage of the battles in the promo reel included shots of all past sentai teams, including series that were never used for American series, much to the delight of the audience.  Saban said there’s no confirmation if those non-MMPR heroes will appear in the final series.  They had asked Toei to film sequences featuring only Zyuranger forward – it’s unknown how much of the all-heroes footage will be used in the final product.

The promo reel was well received by fans at the convention, especially footage from the 199 hero great battle.  Saban has been experiencing a resurgence of popularity of the series.  After several series produced in association with other companies including Disney, the current series, Power Rangers Samurai, is the first they’ve produced on their own since 2001.  Saban has brought the Internet into their marketing in a big way- their website and Facebook page appeal to both new and long-time fans of the series.  They’ve also released DVD sets for the previous series, including a 40-DVD set from Time-Life of the first 7 series.