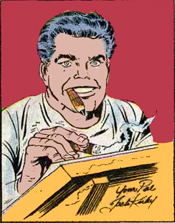 Today marks the 95th birthday of the all-time king of comics, Jack Kirby. In the comics racket, that makes today a national holiday. The influence of superhero comics on our popular culture has never been greater, and, therefore, Jack’s impact upon our society has never been stronger.

To help celebrate, Jack’s 16 year old granddaughter Jillian has teamed up with our friends at The Hero Initiative on the Kirby4Heroes initiative.

The Hero Initiative, the charitable organization dedicated to helping veteran comic creators in medical or financial need, is celebrating the birthday of Jack “King” Kirby on August 28 with a little help from The King’s family.

Hero has recruited 100 artists to get up on the morning of August 28, 2012 to simply “Wake Up and Draw.” This new event is a way for artists to limber up, get the creative juices flowing, and celebrate the day by drawing and sending a “birthday card to Jack.” All 100 drawings will be featured in a special gallery at ComicArtFans.com, and fans can follow the action through the day on Twitter searching hashtag: #WakeUpAndDraw. All drawings will be auctioned to benefit Hero Initiative at a later date! Neal Kirby, son of Jack, and artist Tim Seeley are featured in a special YouTube video on the event here.

And Jillian Kirby, Jack’s granddaughter, has spearheaded the “Kirby4Heroes” campaign. Jillian has recruited a number of comic stores to donate a percentage of their sales to Hero on August 28, and encourage their customers to make donations as well. Fans can donate via the PayPal link at www.HeroInitiative.org, and type in “Kirby4Heroes” in the special instructions box. Jillian has teamed up with Seth Laderman, head of production from the Nerdist Channel, to produce a video spotlighting the campaign. Check out Jillian’s YouTube video on the event here.

“Though my grandfather Jack unfortunately died the year before I was born, I am surrounded by books, artwork, and of course family stories and anecdotes so much that I feel like I’ve known him my whole life,” said Jillian Kirby. “Even though I never had the opportunity to know him personally, I have learned my grandfather was a very giving and charitable man. I know my grandfather would have been the first to lend the Hero Initiative his support.”

Neal Kirby adds, “By supporting the Hero Initiative through the ‘Kirby4Heroes’ campaign and ‘Wake Up and Draw,’ comic book fans can honor my father on his 95th birthday in the same manner that he would have.”