John Ostrander: Writing Fiction – You Can’t Make This Stuff Up 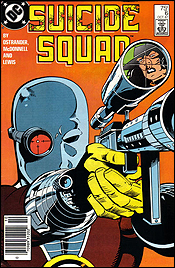 Back in 1986, I was selling DC Comics on the idea of the Suicide Squad. At the time I proposed it, the Squad would be a relatively subversive idea: the U.S. government would use supervillains on covert ops that were deemed in the national interest. Unofficial, unseen by the public, doing dirty work.

Between the time I sold DC on the idea and when the first issue debuted (May 1987), the Iran-Contra Affair, also known as Irangate, broke out. In it, the Executive Branch of Ronald Reagan’s White House were illegally selling guns to Iran and using the proceeds to fund the Nicaraguan Contras that had been banned by Congress via the Boland Amendment. So the U.S. government was engaged in illegal covert action already. Once again, reality made me look like a piker.

Reality has a way of doing that. There are things that happen in so-called “real life” that I would find it hard to sell to an editor.

Let’s take Rep. Todd Akin (Republican, Missouri), who is running for the Senate seat in that state. He famously said last week that, in the cases of “forcible rape” that pregnancy isn’t likely because “If it’s a legitimate rape, the female body has ways to try to shut that whole thing down.” (The New York Times covered the whole incident pretty well here. This is not some backwater goofball; he’s a six term congressman and is, or was, a member of the House Science Committee.

I don’t think I could sell an editor a character who believed something that fundamentally flawed. It is too much of a caricature. And yet it’s real.

Let’s take another case. Back in January, Tennessee State Senator Stacey Campfield, a Republican, claimed that it was virtually impossible for heterosexuals to get AIDS. I guess he never heard (or cared) about how AIDS has ravaged Africa – or, for that matter, America. Okay, this one I might get past an editor but again I’d be close to caricature and parody.

And down in Texas, Judge Tom Head said if President Obama is elected to a second term, it could cause a civil war. “He’s going to try to hand over sovereignty of the United States to the U.N. We’re not just talking a few riots here and demonstrations, we’re talking Lexington, Concord, take up arms and get rid of the guy.” He added: “Now what’s going to happen if we do that, if the public decides to do that? He’s going to send in U.N. troops. I don’t want ’em in Lubbock County. OK. So I’m going to stand in front of their armored personnel carrier and say, ‘You’re not coming in here.'”

The judge says he was quoted out of context but you can see a video of it here. He was quoted exactly. And he wasn’t foaming at the mouth or kidding; he’s was very matter of fact about it. And the interviewer is just sitting and nodding and going “Mm-hmm. Mm-hmm.”

Again, I don’t know if I can sell him as a character to an editor of fiction. I’m not sure I could sell his scenario to an editor. There are too many logic flaws in it. A fantasy should have a least some element of reality in it and this is just paranoia.

What links them all? They’re all right wing Republican conservatives with strong Tea Party connections. Individually, they are incidents. Link them together and they’re a narrative.

We’ll talk more about that next week.