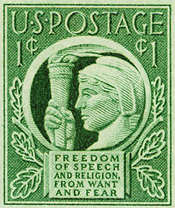 Although closeted in the interim report of the 1954 comic book hearings, race was not an issue that America really wanted to deal with and perhaps that above all is why race had been given little more than a nod in the hearing.

Race was however one of the major reasons that 2.5 million black Americans registered for the draft between 1941-45. Hoping that by helping their country win the war the United States would at last make the “Four Freedoms” a real part of their lives and not something they had to aspire too. Freedom of speech and religion, freedom from want and fear were offered to every American by President Franklin D. Roosevelt in one of the greatest speeches in the history of the United States of America.

Black people were well aware that those freedoms were not being offered to us, not without some serious mind changing by many in the country. Enlisting and fighting in World War II was going to change those minds that at least what a great many black people believed or wanted to believe. During WW II Japanese propaganda ridiculed America’s so called great society by pointing out the hypocrisy that existed therein. They pointed to the exclusion of black players from baseball, the national past time, as proof of that hypocrisy.

And they were right.

The great society that was America where “all man are created equal” and where “land of the free, home of the brave” originated was anything but to black people in the United States. Other American ideals such as opportunity, rights, liberty, democracy and equality were a rallying cry from America to the world. Baseball has been the national pastime almost since the first ball was thrown out at the first game. Nothing says America like Baseball.

Japan’s propaganda aside, WW II saw the best of America. The war produced many heroes and many more books and films based on those heroes which trilled the American public.

During World War II there were plenty of black heroes, but even today those heroes are slow to be recognized. As late as 1993 there were no black Medal of Honor recipients. That was rectified in 1997 when Bill Clinton awarded the medal to seven African American World War II veterans. This only after an Army commissioned study that showed clear racial discrimination in the awarding of medals.

Perhaps with an acknowledged black hero from the war the civil rights struggle would have been given the push that could have garnered patriotic pride in the county. That push may have given way to needed awareness that blacks were just as American as the next guy. Unfortunately, the war was not to be the event that would level the playing field for black people.

Perhaps the playing field needed to be an actual field.

That hero would be Jackie Robinson and 2012 marks the 50th anniversary of Jackie’s induction into the Baseball Hall of Fame.

Wrong. If you believed Jackie Robinson was the first black player to play professional baseball, and after Robinson it was easy for blacks in the majors, then you are in for a bit of a surprise.

In 1867, just two years after the end of the Civil War, organized baseball made its first attempt to ban blacks. The National Association of Baseball Players refused to allow an all black team from Philadelphia to join the league.

In what was the brave new world of Post Civil War America it’s puzzling (at least it is in retrospect) that the great state of Pennsylvania where the railroad system, iron and steel industry, and its vast agricultural wealth contributed greatly in the North’s victory did not protest this snub.

Maybe, now that I think of it, it’s not so puzzling after all since there are currently some funny voter restrictions going on in the once great state of Pennsylvania. But (Peter, I love you dude) I digress…

Bud Flower is the first known professional black baseball player. He played on an integrated team in 1878. During the next twenty-five years, more than 50 blacks managed to play on white teams and John ‘Bud’ Fowler was the first when he joined a white professional team in New Castle, Pennsylvania in 1878.

Being able to “play” was clearly a double edge sword.

Making a living as a black man playing a game must have surly been a dream come true in an era when having a career and not just a job was a dream realized by very few in the days following the Civil War. To many, having any income and not just trying to live off the land was a godsend.

However, post Civil War America after blacks were freed was anything but the Promised Land that blacks thought it would be.

In the south, lynching black people was not only a possibility but in some areas it was an assurance. Blacks had little to protect themselves with while playing a game that was ripe with racism and danger for most if not all of them. Some players made it a habit to carry a bible as a way to comfort them. It’s not known if Bud carried a bible, however, what is known is Bud is credited with inventing the first shin guards. White players were spiking him so often that he began to tape pieces of wood to his legs to protect himself.

Religion to many African American slaves was sometimes the only saving grace that could be embraced with little fear of outrage from their masters, when freed, African Americans continued to embrace their faith for the strength they would need facing Jim Crow America.

Upon his entrance to the game many blacks considered Jackie Robinson a savior of sorts. Jackie’s arrival on the world stage, lifting them out of the bondage of separate but clearly unequal treatment at least in baseball.

Jackie Robinson was the first black player in the modern age. The end of the golden age of radio and the advent of the age of television helped usher in this ebony knight in shining armor. Much like the early days of baseball, an African American making a living in the beginning of the comic book or related industries would have been a dream come true.

What, pry tell does this have to do with comics?

Baseball, with its barriers to entries, talent, skill and perseverance to name but a few mirrored the comic book business regarding race. Baseball has moved on and so has comics but there still exists a great many who think those obstacles are still in full effect for blacks in comics.

America during the 50s and Jackie Robinson’s story is a perfect parallel for African Americans in the comic book industry even today.

Too many fans of the great American pastime there was nothing more offensive than a Negro ball player. When Jackie broke the color barrier in 1947 there were organized revolts around the country as well as within baseball. By 1954 Jackie had pretty much won over baseball fans and a great many Americans. In spite of the fact that victory was being waged and won on the baseball field, African Americans were still fighting on many other fronts.

Some of those battles were public, a great many more private and some in utter secretly.

Like Jackie Robinson and his journey but deep in the background so far off the radar of anyone black or white was the battle over blacks in comic books. Utter secretly may even be an understatement. It’s safe to say that in 1954 people concerned about civil rights be they black or white were not giving any thought to comic books as a tool for social change.

Except there were a few people in comics who were fighting the very fight that Branch Rickey had fought for Jackie Robinson. At the forefront of that battle in 1956 was the two-year old Comics Code Authority on one side and EC Comics on the other.

The Code tried its best to stop EC from publishing a particularly offensive (to them) comic book. The book they were trying to stop was an issue of Incredible Science Fiction the story was called “Judgment Day.”

What was objected to was not a gory scene of a space monster under orders from a criminal ripping to pieces an earth girl who, clad in scant bra and panties was an obvious sexual tease for young 50s era boys.

What was objected to was the main character, an astronaut, was revealed on the last page in the last panel to be a black man.

Perhaps they wanted to see his birth certificate…

WEDNESDAY: Mike Gold, Doctor Who, and What?