Review: Lord Of The Jungle #1

Reviewed by Joshua Pantalleresco
Lord of the Jungle is Dynamite’s Adaptation of Tarzan.  I have to admit I was both enthusiastic and skeptical when I heard of this book.  I was skeptical because Tarzan’s depth of character is rarely explored.  His animal cunning is always apparent, but one of the things that always got me was how intelligent Tarzan is.  He taught himself to read in the original novels.  That kind of intelligence is often missed as part of the character.
The first two images of the comic are two skeletons.  It’s a very grisly image and hints at the tragedies that occur in this issue.  Yet the third panel managed to dispel one of my misgivings immediately.  Tarzan is learning how to read.  This is going to be an intelligent Tarzan.  The contrast on that first page is very fitting.  There is a kind of beauty in the jungle, yet there is a grim, savage reality and it’s all displayed on page one. 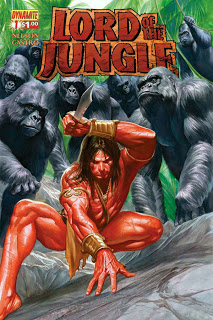 The rest of the issue takes place twenty years prior when Tarzan’s parents John and Alice were stranded in the jungle by pirates.  There, John and Alice are forced to survive the hostile environment they have found themselves into.  Now the ending if you have read Tarzan is obvious, that said there’s definitely a few touching moments in the first issue.
One of my favorites was when Alice and John defended themselves from a mighty gorilla.  John picked flowers for Alice when a bull ape came from nowhere and attacked.  Both characters managed to protect each other and it gave the scene a very triumphant feel to it and showed how much of a team they were when they worked together.  It mirrored nicely with the end when John died defending the baby by himself.    Tarzan at that point is taken in by the apes.
Arvid Nelson did a fantastic job with adapting Edgar Rice Burroughs’ John Carter series with Warlord of Mars, and so far it seems he is going to repeat that magic here.  Arvid is faithful to the original material and manages to add and expand moments that were in the novels.  He’s off to a good start adapting this great classic to comics.
I really love Robert Castro’s pencils.  I love his ability to contrast beautiful moments with terrifying imagery.   He’s able to balance some of the horrors of the jungle with some amazing shots.  The opening page is living proof of this, but he manages to do it again and again in the issue.  That one shot of baby tarzan is surrounded by panels of monsters and tragedy.  My favorite image in the book is the landscape shot of Lord Greystroke’s home on page two.   It felt very majestic, even as a shadow of its former brilliance.
Simon Bowland and Alex Guimaraes deserve credit.  The storybook on page one is just brilliant and fun lettering.  It added a kind of innocence to the scene that was sorely needed.
All in all, this is a solid book and a nice addition to any pulp reader’s library.  For one dollar you can’t go wrong.  Hopefully the rest of the series has the same quality throughout.
Share