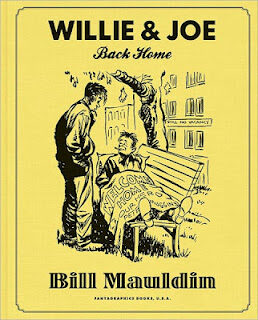 This book — collecting the cartoons Mauldin created for syndication from July of 1945 through the end of 1946 — cannot be fully appreciated by just reading those cartoons. Luckily, Willie & Joe: Back Home

, which I reviewed in a round-up of comics-creator bios), which explains exactly how, in those cartoons, Mauldin was systematically dismantling all of his good will and success from the war years by doing the one thing an editorial cartoonist must: fearlessly telling the truth as he sees it, afflicting the comfortable and comforting the afflicted.

Post-war America didn’t want to hear what Mauldin had to say; it was ready to turn back to isolationism, crony capitalism, racism, and a casual disdain for most of the rest of the world. But Mauldin had America’s ear after his hugely popular and fearlessly honest Up Front war cartoons, and he was going to keep saying what he had to say as long as he had that ear, no matter what. It didn’t last that long, and it ruined the career he had at the time — Mauldin could have made a fortune, and settled into a long and very comfortable life as a mildly left-wing all-American cartoonist, if he’d bent with the wind — but it’s a glorious thing to see with the proper background.

The worst thing, for a modern eye, is how obvious and uncontroversial many of Mauldin’s points seem now: yes, the FBI really should have worried more about lynchings, and war profiteers were bad, and education is a good thing. So Back Home would not be nearly so impressive without DePastino’s introduction — you need to see what Mauldin was fighting against to realize how hard he was fighting.

Mauldin’s art was as strong as his writing here, too: the early cartoons here especially have a loose, flowing line and lots of ominous, slashing blacks. But it’s the subject of the cartoons — and what that implies about the world in which those things had to be asserted loudly — that has the most impact here. Back Home is a fine book by one of the 20th century’s best cartoonists, and an important historical document — as much as, if not more than, his more famous wartime cartoons.