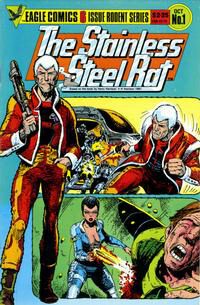 Harry Harrison, best known for his character Jim DiGriz, the Stainless Steel Rat, and the novel Make Room! Make Room! (adapted into film as Soylent Green) died yesterday at the age of 87.

Harrison started as a comics illustrator in 1947, notably with EC Comics’ two science fiction comic books, Weird Fantasy and Weird Science, as well as a short stint on Blackhawk for Quality, and various war, western, and romance comics– even western romance comics. Harrison was one of Wally Wood’s early employers and the man who brought Woody to EC.

He also edited comics in the 50s for very small publishers. He used house names such as Wade Kaempfert and Philip St. John to edit magazines, and has published other fiction under the names Felix Boyd, Hank Dempsey, and even as Leslie Charteris on the novel Vendetta For The Saint. Harrison also wrote for syndicated comic strips, creating the Rick Random character and writing the Flash Gordon comic strip during the 50s and 60s.

Harrison is now much better known for his writing, particularly his humorous and satirical science fiction, such as the Stainless Steel Ratseries (which was adapted into a comics series by Kelvin Gosnell and Carlos Ezquerra) and the novel Bill, the Galactic Hero (which satirizes Robert A. Heinlein’s Starship Troopers). But he may be best known for Make Room! Make Room! which was adapted into film under the title Soylent Green— which (spoiler alert) is delicious.

He is survived by two children, Todd and Moira. Our condolences to his family, friends, and fans.