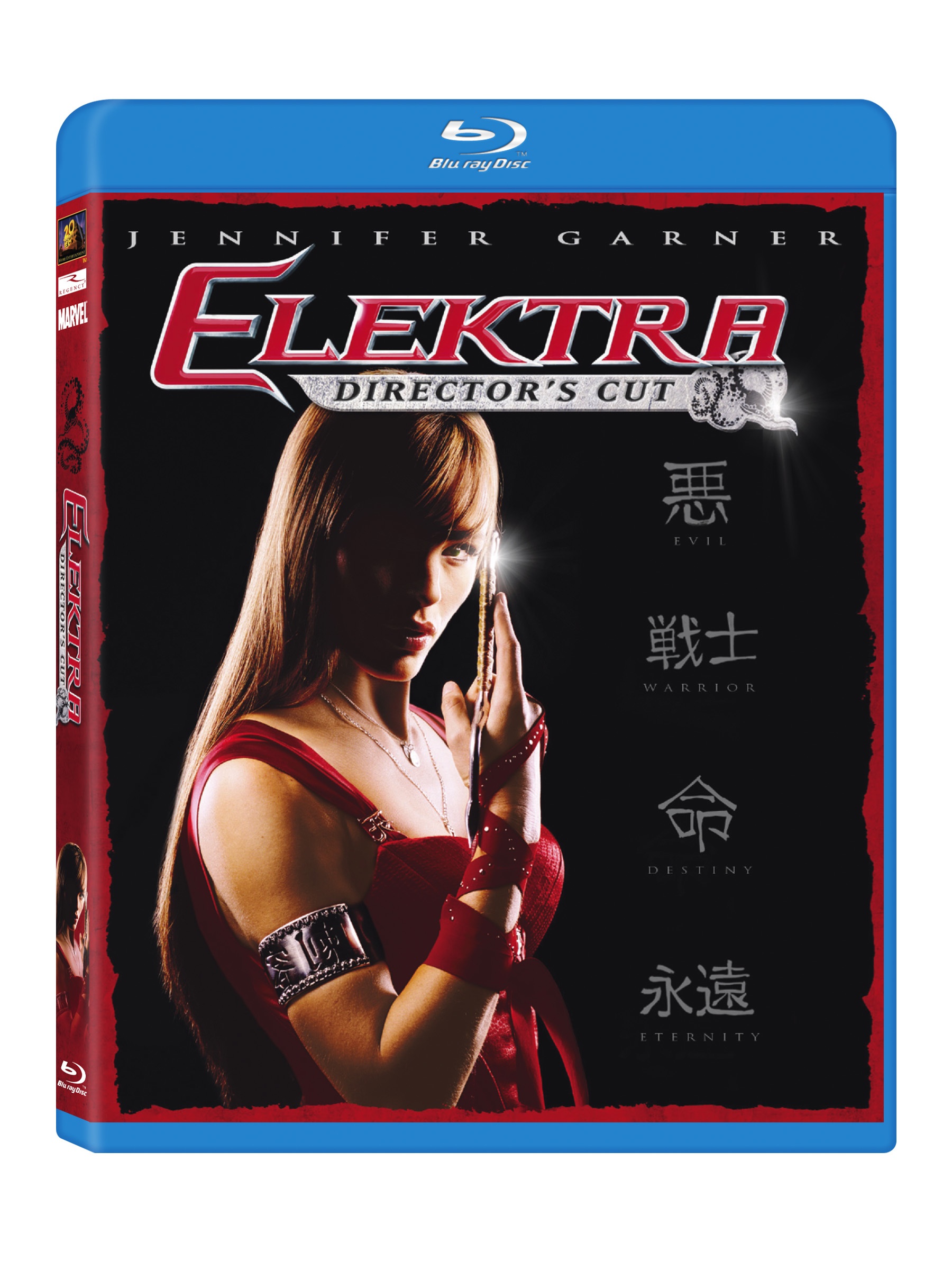 The idea of Jennifer Garner playing Elektra to Ben Affleck’s Daredevil may have seemed a great idea at the time, given her athletic prowess in [[[Alias]]]. And unlike so many supporting characters who get eyed for spinoff movies (Jinx from the [[[Bond]]] series, [[[Silver Surfer]]], etc.), she actually got featured in a 2005 feature from director Rob Bowman.

is out on Blu-ray from 20th-Century Home Entertainment and the three minutes added do not make it a substantially better experience.

The problem with the Zak Penn, Stuart Zicherman and Raven Metzner screenplay is that it never tells us anything about Elektra Natchios as a person. We’re shown flashbacks to her upbringing without detailing why her father was so hard on her. We’re shown she has OCD but where it comes from and why it’s even mentioned is never explored since it never plays a part in the film.

The story is a muddled mess with too many things going on at once, little of making any sense. The Hand, an evil organization of black-clad ninja controlled by business-suited masterminds, and the Kimagure, which is more of a martial art and philosophy as embodied by Stick (Terence Stamp). You know they’re the good guys since they dress in white.

Caught in between is the Treasure. We’re led to believe it was likely to be Elektra herself but no, the treasure turns out to be Abby Miller (Kirsten Prout), a 13-year old who has already lost her mother to the battle between forces and is on the run with her father Mark (Goran Visnjic). Elektra is lured into their world through needlessly complex ways and then has to defend Abby from a quartet of barely named super-powered assassins.

There’s plenty of fighting and plenty left unexplained. And frankly, as the film ends, we know nothing more about Elektra or the real struggle between Roshi (Cary-Hiroyuki Tagawa) and Stick.

In one sequence, Elektra turns on the gas stove, tosses a candle into the kitchen and causes a devastating explosive blast to stop the Hand from entering her ancestral home. With the gas still on and flames everywhere, one would think the house would catch fire but no, miraculously, we never see the flames or see anyone concerned about the fire. Its this sort of story illogic that mars what could have been an interesting story about a fascinating character.

The acting is stiff and we’ve seen better from the more familiar names, especially Garner who has range if allowed to use it. Stamp is appropriately gruff as the blind teacher but with the cap of white hair and black outfit, I mistook him for Marlon Brando.

The initial DVD release was criticized for being too dark and this
version is better but not perfect. The DTS-HD 5.1 Master Audio is also
adequate.

All the Standard DVD extras are contained here minus a clip of Garner
appearing at Comic-Con International to promote the film. None were
repurposed for Blu-ray and remain at the standard proportions. You still
get the Rob Bowman and editor Kevin Stitt commentary, 19 minutes of
deleted and alternate scenes, the two-part, two hour [[[Relentless: The
Making Of Elektra]]], [[[Elektra: Incarnations]]], the 52-minute comics
history as told by the creators, and finally [[[Elektra In Greek
Mythology]]] which provides a nice history on the incarnations of the
Greek character.

The extra scenes are interesting because you learn some things and some
of the lines in the finished film make more sense. We see the Ben
Affleck cameo from a dream sequence and have an alternate opening which
would have set the stage a bit better.

For me, the best part remained the comics creators– Frank Miller, Klaus
Janson, Bill Sienkiewicz, Brian Michael Bendis, and Greg Rucka talk
about their time with the character and you learn a lot about the
creative process.