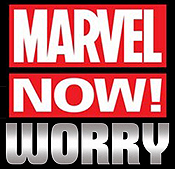 Sorry for my absence last week, loyal readers. It would seem something had to break in my fragile world, and this was the first thing closest to the exit ramp. Luckily for me you all had more important things to do on a Saturday morning than read my rants and raves. Right? You didn’t? You mean to tell me you’ve been sitting there, at your desk, for a whole week… awaiting my article? Jeez. I’m sorry. Let me make it up to you. Let’s start off with something really inflammatory to get back into the thick of it, shall we?

Marvel Now is what I’d wished DC would have done with their New 52.

Marvel comes right out of the gate with the smartest roll-out plan I’ve seen in a while: A sensible one or two new books out every week, over the course of a few months. DC’s “throw everything at the fan, and watch the sales spike and recede” did exactly that. Marvel Now (boy, that’s gonna get annoying) sidesteps the idea that fans are willing to try everything all at once, in lieu of a doing it a few at a time. I’m a marketing man by trade. This screams of “listening to the target audience” and “lowering the barrier to entry” for those less willing to hop aboard. In human-speak? Someone at Marvel realized fans aren’t made of money. They are more willing to start a new series at #1, and toss it into their weekly rotation a little at a time, rather than dump their entire paychecks out for the opportunity to “catch up” to a continuity that wasn’t quite rebooted, wasn’t quite reset, and wasn’t quite defined in the slightest.

Marvel also has taken it upon themselves to shake up some major players on major books, after successful long-term runs had been accomplished. Where DC has been quick to play musical chairs before some writers grew their sea-legs for a particular title, the House of Mouse once again played it cool. Let Bendis play in the Avengers sandbox until he’s run out of awesome things to do. Then let Fraction do the same with Iron Man. Then put Waid (who is still rocket hot after relaunching Daredevil back into our hearts) onto a book, The “Insert-Adjective-Here” Hulk, that frankly I’m sure no one has cared about since Jeph Loeb murdered it in the early aughts.

In the art department, fan favorite John Cassaday gets to give The Avengers a nod, which I hope is as good or better than his work on the Astonishing X-Men. The always tried-and-true Mark Bagely will lend his hand at Fantastic Four, which should loosen the book up from its present look and feel. And over in the Four’s sister (or really… daughter?) book, FF, none other than Mike Alred is slated to put pencil to page. The last time I believe he was around MarvelLand, we got X-Statics, which was X-cellent. Sorry, had to go there.

And how about the overall plan? Axel “Not Danny D” Alonso made it pretty clear that the books that are working well now will have no plan for resets. This means fans of Daredevil, the Punisher, X-Factor and the like won’t have to fear an immediate exit strategy and creative retreat from their favorite books. This is of course (to me, at least) a direct wink and a butt slap to the boys with the new oddly shaped logo.

DC was glad to let its entire line of books stink up the joint for the last three months they were around prior to the New 52 debut. Never in my 20+ years reading comics had I felt more books “phoning it in” then at that time. As a 20+ DC book subscriber? It rubbed me the wrong way. Hard. Here, Marvel seems to realize the old adage holds true; if it ain’t broke don’t fix it.

Generally we know this is the point where I play devil’s advocate. And I see by the folding chair in your outstretched arms, ready to strike me where I type, I’d better get on with the “Howevers…” or else. Now, Marvel Now is just an on-paper-plan at this point. Even with that said, it’s hard not to notice a few things that reek of desperation. I love Brian Posehn. I do. But does anyone here honestly wish to place a wager on how long his run on Deadpool will last?

And just how many Avengers titles are they releasing? 20? 30? We get it, the movie made a kajillion-billion Disney dollars… but someone somewhere had to wave a white flag. As it stands I still contend that the over saturation of books with the popular characters just clutters up racks with an ultimately less-than-the-best product. All this, and somehow, the X-books still all sound ludicrously horrendous, Bendis or not. The idea that “silver age” X-kids land in the present, and get to play the “Oooh-how-the-world-changed-card” to me is choking hard on the gimmick bone. Be sure to take a shot every time NewOld Jean Grey asks “what’s an iPod?”

See? I’m not just shilling for Marvel, unless they wanna send me a check. In that case, I’ll make myself “AR” compatible in a heartbeat. In the mean time, my opinion stands: Marvel Now appears to be better thought-out, with a smarter release schedule, and an ideology that holds on to the notion that quality beats quantity every single time. Mark my words, kiddos. Marvel Now is gonna pants DC, and in the scramble expect DC to fire back with 17 epic all-title consuming crossovers.

Did you mark that down? Good.