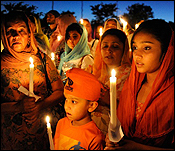 We’ve been pretty grim, these last couple of weeks, so I thought maybe I should lighten up. What I thought I’d do, last night, was take my place at the computer and spin some wordfluffle suitable for submission to ComixMix and then…what? Continue existing? But before I could get to it, I saw the news window on the screen and learned that some lone gunman – anything familiar in those words? – had killed six Sikhs in a Wisconsin temple before being himself gunned down by police. We don’t yet know why. We probably won’t be too surprised when we do.

The politicians – no surprise here – beat me to the fluffle. The same dreary litanies we hear so often: hearts and prayers going out to and deep sadness and troubled days ahead… Democrat, Republican, independent all saying the same thing and in so doing actually saying nothing.

Look: I get ritual. I don’t much like it and I’m no good at it, but I think I understand it. Somebody dies or gets married or gives birth and you recite some variation of a limited set of sentiments and it’s not the words that have meaning, it’s the act of saying them. We use these formulae to console and rejoice and lament because, really, language isn’t up to these primal needs and so we let the clichés act as signifiers to express what resists expression. And that’s all good.

But when ambitious strangers say the words? When they claim that a tragedy that happened to strangers makes their hearts heavy? Allow us, please, to doubt. Allow us to at least suppose that the ambitious ones are using tragic occasions, at the very least, only because the recitation of the words is expected of them or, even less admirably, to further their own agendas. The word for this is hypocrite.

Let’s agree that hypocrisy stands pretty far down in the catalogue of major transgressions, and I’d have no serious quarrel with it if it were followed by action of some kind. Any kind. We’re not advocating anything draconian here. We’re not even advocating a program of legislation and, to be honest, I doubt that any single law or even set of laws will solve the problems that lay deep in the senseless acts of violence that are happening again and again and again.

But shouldn’t we start? Somewhere? As Jon Stewart pleaded, let’s agree to discuss everything, openly and honestly, with nothing withheld from consideration. Then maybe the hollow words will begin to have meaning.