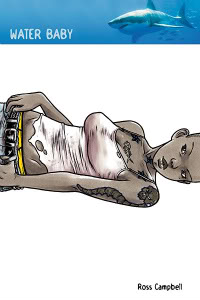 [EDITOR’S NOTE: This is the fourth in a series of reviews of the five books coming out from DC’s Minx imprint this year. Previously, Van Jensen reviewed Rebecca Donner’s Burnout, Cecil Castellucci’s Janes in Love and Brian Wood‘s The New York Four. -RM]

Ah, ambiguity. It can be the driving force of great fiction, powering along mysteries, character dramas and horror stories.

And, when wielded irresponsibly, ambiguity can sink a promising book straight into the murky depths of… somewhere or other.

($9.99), a new Minx book written and drawn by Ross Campbell. At the book’s start, surfer girl Brody loses a leg to a hungry shark. She sorta tries to get over it with the help of her sorta friend Louisa, but then things kinda get crazy when Brody’s old flame Jake shows up (he’s somewhat cool but a bit of a jerk).

The girls (who have a relationship that meanders toward lesbianism, but never conclusively) decide to drive Jake back home to get rid of him, and things kinda sorta get even crazier when they pick up Chrissie, a girl who’s either cool or a slut or just crazy. Maybe.

And, eventually, the whole mess wanders toward a conclusion that’s more of a stop than an end.

It basically feels like a book that Campbell just didn’t quite know what to do with. He has an interesting premise and some tough, sexy, angsty characters, but they remain distant and unfamiliar.

Brody, in particular, should be a fascinating lead, as she’s obsessed with surfing and has that ripped from her life, but the story shows no change in her at all. What would seem to be a life-changing moment is instead just a speed bump in her vague existence.

The moments that Campbell excels in are scenes of Brody’s dreams, as she envisions trippy sequences of herself interacting with sharks (illustrated exceedingly well). But, like most everything else in the book, these sequences never come together in a meaningful way, just another ambiguous annoyance.

What is [[[Water Baby]]] about? Girls and guys and road trips and surfing and sharks… Or something.