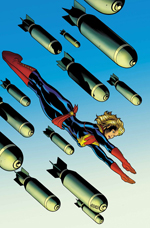 On the left, the cover to Marvel Comics’ Captain Marvel #3, drawn by the gifted Ed McGuinness, out on sale in several weeks. If the first issue is any indication, it’s worth reading.

You might think I’m going to jump up and down screaming “Rip-off! Rip-off!” Well, what do you think this is, The Comics Journal? No, McGuinness is an honorable man (well, to the best of my understanding; I haven’t checked to see if he has an arrest record or anything) and, clearly, it’s the modern Captain Marvel nodding to the classic Captain Marvel – in each case, one of the many – and we have ever right to infer this is a tribute. A common, and noble, practice in comics. This ain’t Roy Lichtenstein trading off of other people’s work.

But it does deserve kudos (not the granola bar; get a dictionary). Ed reached back 63 years to what, in my mind, is a classic cover of the late golden age. This is no small feat, as Kurt (who I knew and worked with in the 1980s) followed in the wake of the artist most associated with Captain Marvel Jr., the astonishingly talented Mac Raboy .

So I wanted to bring this to your attention. Usually, when artists want to reflect back on previously published work, they go for the cover to Fantastic Four #1 or Amazing Fantasy #15. In fact, there’s a slew of such covers and, from time to time, I’ll be reflecting awkwardly upon them. Until then, let’s hear it for Ed McGuinness who reminds us of two legendary characters: Captain Marvel Jr., and Kurt Schaffenberger.