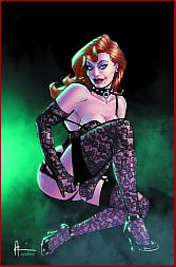 You’d think with the Olympics going on and all that sloppy security Mitt Romney told us about, the authorities would have more important work to do than to count the number of penises (peni?) Howard Chaykin can squeeze into a single comic book. But – obviously, since I’m writing this – you’d be wrong.

I got an email from a British comics shop owning friend of mine, subsequently confirmed by our pal Rich Johnston at Bleeding Cool, that Chaykin’s Black Kiss II #1 was the only title missing in his shipment from Image Comics. Knowing I have a long-standing friendship with the writer/artist (and, ahem, edited his American Flagg! and Blackhawk), he thought I’d be amused.

He’s right about that. Howard’s pushing 62 – not quite as hard as I am – and he’s still raising a ruckus. He’s more than my friend. He’s my hero of the week.

With the Olympics in town, perhaps the Brits are simply wallowing in testosterone and can’t handle Chaykin’s multitude of peni. Perhaps they can’t tell the difference between Black Kiss and Beano. Or maybe they’re simply very insecure.

Howard’s response to me was “And I can only hope Canada is next!”

Black Kiss II #1 goes on sale tomorrow at the more sophisticated comics shops across the nation.