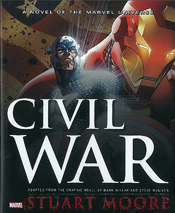 When I heard Marvel’s Civil War was being adapted into a prose novel, I was delighted and intrigued. Civil War is one of my favorite comic book crossovers for several reasons. One is that this is a crossover in which every character has a legitimate reason to be involved. I don’t like it when companies do crossovers for the sake of crossovers – to drive up sales or reader interest or the like – but if the story would logically call for each character to get involved or take a stance, then a crossover can be amazingly interesting and engaging… and this one was.

Another is that along with epic fights and explosions, this conflict speaks to intellectual issues larger than the concerns of an individual protagonist – such as privacy and personal autonomy versus social responsibility and accountability – that are very relevant in the real world. Even though the plot includes a plethora of brawls and superhero disagreements, we also get to see the writer(s) interpreting how long-established characters would react to important social issues.

A third reason is that since the plot pits superheroes against superheroes (as opposed to solely super-villains), we get a story in which almost everyone, no matter which side of the conflict they’re on, is a sympathetic character. They’re mostly all admirable people and heroes, devoted to helping people for one reason or another. Thus the emotional impact of their conflicts with each other is much greater, particularly if you’re already a fan of, say, both Captain America and Iron Man, and were invested in both characters equally before the beginning of the story. The fact that the “villain” of the tale varies depending on which point of view you agree with, and sometimes depending on each particular action as both sides make mistakes, makes it a more substantive and thought-provoking read.

Civil War is about a world growing increasingly uncomfortable with super-powered vigilantes who are able to use their secret identities to dodge public accountability. In this atmosphere of distrust for the superhero community, a tragedy explodes when a group of young superheroes takes on more powerful villains on a reality show in hopes of filming a spectacular triumph and driving up ratings. Unfortunately, instead a villain’s explosive power annihilates 859 citizens in Stamford, Connecticut, including a school bus full of children. It’s a national tragedy that, despite other superheroes coming to help with the aftermath, pushes a bill Congress had already been considering, the Superhuman Registration Act, to the top of the government’s list of priorities. The Act requires metahumans to undergo registration and training with the government before being permitted to legally use their powers in public, and gives the government extremely broad (and often violent) powers of enforcement. After the Stamford tragedy, and with the support of Tony Stark, Iron Man, the Act is quickly pushed through and enacted into law.

All that government procedural stuff might sound a bit dry, but the result of the Act is a full-on war between two camps of superheroes (with the X-Men and a few others just hangin’ out like Switzerland) headed by the pro-Registration Iron Man, and the Anti-Registration (or pro-Privacy/Freedom, depending on your viewpoint) Captain America. At first glance, the sides chosen might seem counter-intuitive, given Iron Man’s love of keeping his affairs and intellectual property away from government control, and Cap’s history as a loyal soldier for Uncle Sam. But Iron Man is basing his actions on the various “optimal outcome” calculations of brainiac Mr. Fantastic and his own outlook as a “futurist,” with a goal of minimizing damage and upheaval; whereas Captain America starkly brings home his reasons for not rounding up a bunch of “different” people for regulation or imprisonment when he reminds everyone of, you know, that time he fought for the United States in a war against the Nazis because they did just that.

It’s a slightly extreme comparison (although at least Cap, unlike most people who bring up Nazis in an argument, was actually there), but even Spider-Man, while working with Tony on the Pro-Reg side, sees that parallel. Of course, once the lines are drawn, both sides struggle with their chosen stance, particularly as injuries and casualties begin piling up; and the fallout of the decisions made as the Act is being passed inform the rest of the story.

If you read the original crossover, you might be saying, “I know all this; why bother with the novel?” But the novel format generally allows for the most insight into characters’ thought processes, and in this book, Stuart Moore opens a door to a better understanding of many characters’ motivations than we might have gained from the graphic version. Thanks to the format he is also able to present characters’ private insights into the personalities of their fellows, such as when we hear Sue Richards’ internal perspective of her husband’s choices and actions, or Tony Stark’s private musings about Peter Parker.

I also noticed that I had a stronger distaste or admiration for certain characters after reading Moore’s prose interpretation than when I read the original crossover (man, did this story make me want to punch Stark in the face) because the prose format is immersive and excellent for drawing readers in emotionally. The flip side of this, of course, is that I did miss the visual impact of a couple of the most moving scenes in, for example, the Spider-Man graphic novel storyline, even though Moore does a good job with them; but I think it’s an even tradeoff (and a fine reason to read both versions, if you liked the original story).

Conversely, if you’ve never read Civil War or are looking for a good read that will introduce you to many of the key characters in the Marvel Universe, this book would be a great choice. Moore’s adaptation efficiently orients readers to the characters and situation. With a pretty massive ensemble cast, he manages to provide enough details about each successive character for us to know where they stand and why we should care while almost entirely avoiding awkward information dumps. He also quickly sets the scene via the book’s shifting character perspectives (namely Iron Man, Captain America, Spider-man, and the Invisible Woman). Although occasionally the sentences get a little stilted as Moore translates a fight scene that could be viewed in three graphic panels into several pages of text (and I would vote for not italicizing actions like punches in future adaptations), Moore does a solid job of conveying the action from those information-packed images into something the prose reader can follow – not a simple task. The story is cohesive and easy to get into, even with the changing perspectives. It definitely kept my attention and made me eager to read on, even though I already knew the general plot.

I did have a few complaints that come primarily from this being an adaptation of the graphic version – first among those being that I missed the characters who didn’t show up here. For instance, I didn’t really expect to see Deadpool (sadly), but didn’t Cable have a decent-sized part in the original story? And what happened to the Iron Fist/Daredevil subplot? I also would have liked to have seen more of the X-Men and other groups or characters. I know exactly why Moore and Marvel didn’t include them – because the ensemble is already pretty big, and they were presumably aiming for one cohesive, comprehensible, and reasonably-sized book to kick off their new prose novel line. That’s fine, and they succeeded. But I would have happily read, say, a three-part prose series of this storyline if it meant even more focused character perspectives (She-Hulk? Ms. Marvel? Cloak and Dagger could have made for some fun reading) and fringe characters making (justified) appearances. The more rich and in-depth a prose story is, the better. Just something to think about for next time, Marvel.

I also felt that the ending was a bit weak, particularly as it leaves out a key closing event in the graphic novel storyline (as well as any mention of Penance, although really I didn’t miss that too much). I suspect the choice to not end the story in death was made to avoid going out on a down note – but the impact of (SPOILER WARNING) this story thread and the character reaction in this scene on how one views the overall story that came before, and the characters in the aftermath, is huge; and to me, that, not where the government or superheroes end up going from there, is the close to this chapter in Marvel history.

However, don’t take my few small criticisms to mean I didn’t really enjoy the book. For a prose adaptation of a major Marvel storyline, it’s excellent. Moore did a stellar job with a complicated text, and through his own interpretation made this novel an excellent companion to the graphic crossover or a great stand-alone way to get into the Marvel universe. I thoroughly enjoyed reading it, and would certainly recommend it. And I look forward to seeing what prose novel they come out with next.

So go out there and give it a try. And until next time, Servo Lectio!