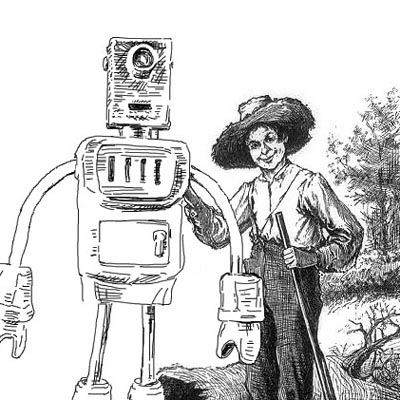 Artist Denise Devine is altering E.W. Kemble’s original illustrations from the first edition of the book to remove Jim and replace him with Robot Jim.

Recently an international controversy and debate broke out when NewSouth Books decided to publish a version of the Mark Twain classic, “Huckleberry Finn,” replacing all instances of the word “nigger” with the word “slave.”  ComicMix editor Mike Gold described this as a “castrated version.”

Luckily, there is a new, soon-to-be published version of Huck Finn that addresses the offensive nature of the n-word, while maintaining (and even exceeding) the spirit of the classic Twain novel.

From the Kickstarter proposal:

We’re editing a new version of Mark Twain’s “The Adventures of Huckleberry Finn” that won’t be bogged down with what Mark Twain was trying to say about racism.

In part, thanks to Mr. Gaiman’s contribution of $80 and tweeting about it, in just two days, the project has surpassed its goal of raising six thousand dollars.  And you still have until March 10, 2011 to donate to the cause to get your own copy of the book when it’s printed.