Mindy Newell: I Am So Tired Of This Bullshit 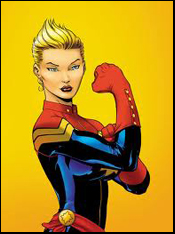 Just read Emily’s column (which is here) about her, uh, misadventures as a woman who loves comics.

Next year will mark twenty years since I first wrote Jenesis for DC’s New Talent Program. And for the last twenty years everything that Emily said last week has been said ad nauseum by me, Kim Yale, Mary Mitchell, Jo Duffy, Marie Javins, Gail Simone, Joyce Brabner… and the list goes on. Every woman involved in the comics world – writer, artist, colorist, letterer, inker, reader – has experienced the overt and covert misogyny typified by Emily’s experience in that comic book store. Every one of us has been on a Women In Comics panel once, twice or more during our professional lives. We’ve all talked about changing people’s attitudes, fighting the good fight, gaining respect. The faces on the panels, the faces in the audiences, they all change, but in truth, nothing changes.

It’s all the same old guano, just ladled out of a different tureen.

And it ain’t just comics or Hollywood. Female nurses – that’s me, folks – make 86.6% of what their male counterparts make, even with the same experience and education. And women in general still make $0.77 on the dollar compared to male earnings.

So what do you do about it? Don’t vote for Romney, that’s for sure. No way is he gonna improve women’s rights.

But what about in the comics world? We’re not quite at the level of law or medical school, where female students now dominate the classrooms, but women are more prevalent than ever in the field, as readers and creative folk. And most of them, I am willing to stake money on, are involved in comics because they love comics, not because their boyfriends or their fathers or their brothers dragged them to a comics shop or to the San Diego Comic-Con.

In number too big to ignore….

Sorry, I forgot, this is the post-women’s liberation era.

Seriously, my advice to Emily and every other woman out there when confronted with a misogynistic geek?

And watch their paraphernalia –

“The water was cold! It’s shrinkage!”