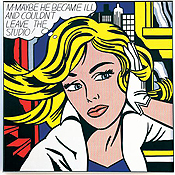 Maybe you’re not reading this. Maybe you’re one of the thousands of computer users who lost Internet access on the interface between Sunday and Monday – that’d be midnight – because some really evil cyberstinkers infected your machine with the “Doomsday” virus and in the process made themselves rich. They were caught – sometimes the Feds get it right – but apparently nothing could be done about their mischief they caused and so, barring the unforeseen, at midnight on the ninth, some 69,000 U.S. computers until things get sorted out. I hope that yours isn’t one of them.

So if you won’t be reading my blather, what will you be doing? Heading toward the annual mind-croggling San Diego Comic Con? If so, well… brace yourself. It’s an intense experience, that con, and I guess it can be an expensive one. Hotel rooms on beachfront San Diego don’t come cheap. Food costs aren’t too bad, but it is a tourist area. And inside the convention itself are hundreds of merchants who, in my experience, are nice people, but they do want to sell you something. And isn’t one of the reasons for con-going to buy stuff you can’t get on your home turf?

But – here it is again – maybe you’ve been bitten by the economy and a trip to southern California is not a current possibility for you. Always next year, but meanwhile… Can you afford a movie ticket? It’s a bit early to see the new Batman flick, which doesn’t open until the twentieth in most places. But the new Spider-Man is all over the place and – here it comes again – maybe you live near a multiplex that reduces admission costs during drive time and, being as financially strapped as you are, you aren’t doing anything else late afternoons, are you? If you have to pay the full freight, skip lunch. And dinner. And don’t even think about popcorn.

Although I haven’t seen the movie myself yet – ahem, maybe Tuesday? – I believe I can calm those who are wondering, What the heck? It’s only been five years since the last Spidey, and only a decade since the first big-screen Spidey and that one did include an origin story, thank you, and now they’re reinventing the whole mythos, including another origin? I mean, what the heck!

Okay, take comfort in remembering that the history of the filmed entertainment’s first cousin, comic books, demonstrates that a little reinvention, from time to time, is not necessarily undesirable. On the contrary. As for the small number of years between origin and origin revisited… There were two filmed adaptations of Dashiell Hammett’s classic crime novel The Maltese Falcon in the ten years before John Huston gave us his version and the existence of the first two did nothing to harm the excellence of Huston’s work.

That’s a factoid you might miss if your computer’s on the fritz and you’re not reading this. Or – wait for it…maybe not.