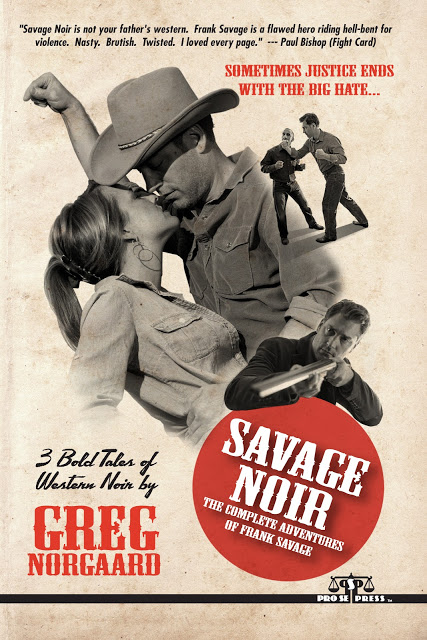 Pro Se Productions, a leading publisher of Genre Fiction and New Pulp proudly presents SAVAGE NOIR: The Complete Adventures of Frank Savage.  Written by Greg Norgaard, SAVAGE NOIR is a hard boiled two fisted western.  This omnibus features the original two novels featuring Norgaard’s raw, exciting protagonist-Frank Savage- as well as a never before published short story chronicling Savage’s last adventure.
There is only one way to deal with murderous souls when killing is their modus operandi and revenge is on their mind. When the West was wild, one man knew this better than any other. His name was Frank Savage.
A SAVAGE RETRIBUTION – On a cross country stagecoach trip, Frank’s destiny causes him to cross paths with people from his past.  Unaware that they are being followed, Frank must come to terms with his old ways.  With the help of his friends, he will face his past and fight for their lives against a madman who will stop at nothing to get his savage retribution.
A SAVAGE DARKNESS –The violent story of four lawmen in search of a murderous group of psychopaths.  Frank leads his new found partners into Chicago’s dangerous underworld in order to destroy the killers who savagely murdered one man’s family.
AN AMERICAN SAVAGE- Never Before Published!  This trek takes Frank to England for his final mission- to stop a killer from continuing his rampage.  A killer that he should have disposed of when he had the chance.  It will not be a mistake Savage makes twice!
According to Paul Bishop (Fight Card), “Savage Noir is not your father’s western.  Frank Savage is a flawed hero riding hell-bent for violence.  Nasty.  Brutish.  Twisted.  I loved every page.”
Gordon Dymowski (Zone 4/Blog THIS Pal) recommends, “If you like your Westerns a little wilder than most, you’ll dig SAVAGE NOIR.”
SAVAGE NOIR: THE COMPLETE ADVENTURES OF FRANK SAVAGE by Greg Norgaard is currently available from Pro Se Productions at https://www.createspace.com/4190844 and at Amazon and Barnes & Noble!  Coming Soon to Kindle, Nook, and Other E-Readers!
For Interviews with the author or more information on Pro Se Productions, contact proseproductions@earthlink.net!