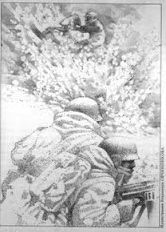 The September 2012 issue of Asimov’s Science Fiction (appearing via online sources and in bookstores in mid-July) will feature a new novella about the variously named character from William Preston’s “Helping Them Take the Old Man Down” (Asimov’s, March 2010) and “Clockworks” (Asimov’s, April/May 2011), who was conceived in part as an homage to Doc Savage.


The new story, which takes place in 1925, sends readers back to the first adventure of the man who will, in time, become “the Old Man.” Be sure to look for “Unearthed” in the September Asimov’s.

For those who want to read the stories in the sequence they’re intended to be read, you can now purchase “Helping Them Take the Old Man Down” and the prequel “Clockworks” in ebook format at Amazon. Both novelettes appear bundled together for $2.99 at the following links: