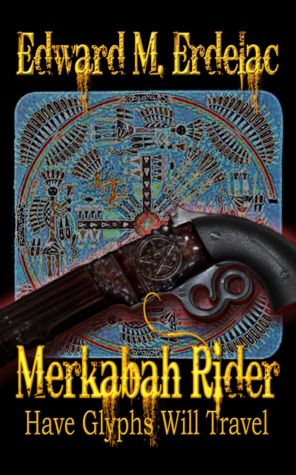 In his two previous books in this series, writer Edward Erdelac established a sweeping tableau that encompasses the American southwest in the years following the American Civil War.  His hero is a Jewish Mystic known only as the Rider. He is a veteran of the war between the states whose one-time religious teacher, Adon, betrayed him and his fellow students to become the agent of ancient alien gods. The Rider chases him across the frontier, his goal to kill him and end the threat he poses.
“The Long Sabbath,” picks up where volume two ended with the Rider and his African ally, Kabede, being chased across the desert by an army of zombies led by three of Adon’s renegade riders. They come across a small U.S. Cavalry outpost and hope to find refuge and support. Instead they are taken prisoner and thrown into the stockade as wanted felons. When several soldiers suddenly commit suicide, the others turn to the Rider and Kabede for succor. Then some of the troopers begin painfully morphing into strange monstrous creatures at the same time the fort is set upon by the legion of undead.  “The Long Sabbath” is a relentless horror-fest that once begun, never lets up and easily one of the scariest tales I’ve ever read.
This is followed by “The War Shaman,” where the Rider and his companions are enlisted by a traveling salesman to help prevent an alien entity from persuading various Indian tribes to ban together and use black magic to annihilate all whites and Mexicans. To stop them, the Rider, working through body of friendly Apache brave, must convince Geronimo of the shaman’s true identity and goals. Another rousing battle between good and evil with the Rider being aided by the Indian spirits of the mountain; a truly imaginative yarn.
The third tale is called, “The Mules of the Mazzikim,” and revolves around the Rider’s obsession with a demon succubus he encountered in a previous battle against the forces of evil. According to Satan, Nehema is being punished by her mother, Lilith, for having aided the Rider. Now our hero feels compels to seek her out and rescue her. Unfortunately the celibate warrior is tricked by his own naïveté and by the time he realizes his folly, he has been manipulated into a trap and finds himself sentence to the newly constructed Yuma State Prison. This is a tale of twisted love in its most perverse disguise and easily the best crafted story in this collection.
Next up is the most pivotal chapter in the saga thus far. “The Man Called Other” finally has the Rider coming face to face with his renegade teacher, Adon.  Only now Adon has inhabited and is controlling the body of the Yuma Prison warden where the Rider is being held for having slain the woman succubus Nehema. Alone and at the mercy of his arch enemy, Rider must fall upon his faith as never before to shield him against Adon’s manipulative abilities and their confrontation in the dream world.
By the fifth and final story, “The Fire King Triumphant,” the Rider and his handful of allies have discovered they possess the an arcane document that will allow the Old Ones to breach the wall between dimensions and achieve their ultimate goal, the invasion of the Earth and its utter subjugation.  But no sooner do they uncover this final piece of the puzzle then the Rider is shot down in the streets of Tombstone by a “blue” gunslinger who then steals the sacred scroll and rides away leaving our hero bleeding to death.  Now that’s what I call a cliffhanger.
“Merkabah Rider – Have Glyphs Will Travel,” is a fine addition to the previous volumes but more than ever begins to weave a tight pattern giving the readers a closer glimpse of the overall series.  In the process the stories become episodic in nature and though I’m still going to recommend the book, I do so with the caveat that you pick up volumes one and two first.  Otherwise you are going to find yourself both enjoying this feast but still feeling like a whole lot has been left out.
Share