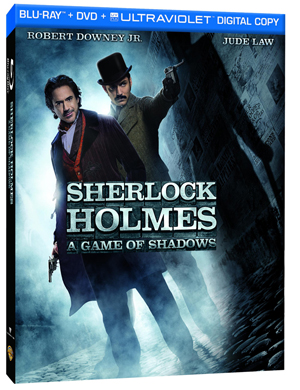 While I like Sherlock Holmes, I am far from a scholar nor have I seen every film adaptation or read every pastiche written. Still, I love the concept and the characters and setting are certainly appealing. Holmes, as created by Sir Arthur Conan Doyle, is etched in the public mind as one of the most brilliant consulting detectives ever imagined with no clue going unnoticed. His encyclopedic knowledge is legendary and his eccentricities make him nothing but fascinating, including the desire to have Dr. John Watson accompany him as companion and official biographer, a level of narcissism unique in the late 19th century.

As a result, when it was learned Guy Ritchie was to helm a new adaptation with Robert Downey Jr. as Holmes, eyebrows rose around the world. Then we saw the 2009 release, and were generally pleased with the bromance between Downey and Jude Law, the latest Watson. This was a more athletic and handsomer Holmes, even capable of expressing desire for Irene Adler (Rachel McAdams). The film horrified some and enthralled the rest, earning big bucks and prompting Warner Bros. to fast-track a sequel.

A Game of Shadows opened in December and did quite well at the global box office and now it comes to home video and digital download from Warner Home Video. After the first film established Holmes, Watson, and London, the time had come to introduce audiences to the greatest criminal mind found in literature, Prof. James Moriarty. He was teased at the end of the first film and this time we waste little footage making it clear he’s the antagonist. We’ve already adored Jared Harris’ villainy as David Robert Jones on Fringe so were pleased to see him cast as the intellectual equal to Holmes.

Holmes has determined that a series of unconnected events points to Moriarty manipulating economic and political events in Europe to push the countries on an inevitable path to war. It falls to the detective to thwart the scheme but the key difference between the two is the professor’s willingness to callously murder and destroy while Holmes remains a moral individual. It doesn’t take Holmes long to convince Watson the sum of his equation is correct and despite his impending nuptials to Mary Morstan (Kelly Reilly), the doctor agrees to assist. And we’re off.

Along the way, we briefly see Irene before she is killed by the villain and the participation of Mycroft Holmes (a delightful Stephen Fry). Additionally, Holmes becomes intertwined with the affairs of a gypsy clan including Simza (Noomi Rapace) while Watson more or less parallels that with his confrontations with a former military sharpshooter Sebastian Moran (Paul Anderson).

This time around, there’s a lot of sound and fury but in the end it doesn’t signify a lot. Moriarty is correct that the countries are headed inevitably towards war, as happens 24 years later in our world, but the geopolitical issues are never brought up and audiences are left to take the man at his word. His intricate scheme for war profiteering shows a certain level of impatience, a trait Holmes never exploits. Instead, there’s fighting, running, shooting, and lots of talk. The film’s rhythm feels off-kilter as some characters impossibly escape death one time too many while others are dropped with ease. The final confrontation between the two masters, over the clichéd chess table, is well done but by then we’re feeling somewhat exhausted and not all that invested in the outcome.

What is nice is that we get more Holmesvision coupled at the end with Moriartyvision and their final battle is nicely imagined until the final solution, which echoes “The Final Problem” on which the movie is most loosely based.

In the end, the film was a mildly entertaining way to pass an evening but it doesn’t measure up to the first and felt somewhat bloated. If they really move ahead with a third installment, one hopes they find a stronger story.

The video looks and sounds great allowing you to luxuriate in the costumes, sets, and nicely integrated CGI backgrounds.

The Blu-ray comes with the Maximum Movie Mode hosted by Downey, who snarkily asks if we’re unwell or it’s rainy out, the only possible reasons people would watch the film a second time with the extras. He makes some nice comments about the production, how things were choreographer and shot so we get the usual assortment of behind-the-scenes material so yes, if you’re looking to kill two hours (less actually if you skip ahead to just Downey moments)  and like this sort of material, it’s worth a look.

There are 35 minutes of collected Focus Point featurettes in bite-size chunks focusing on the characters and situations. No deleted scenes or gag reels can be found here.

Additional material can be found on the Movie App with script-to-screen comparisons, maps, character bios and other material but that requires serious desire on your part and heralds a movie away from disc to the web for such content.