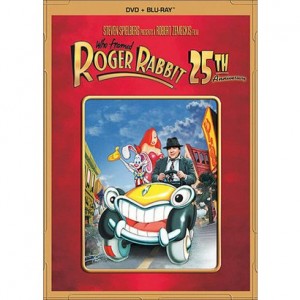 Every now and then an anniversary comes along and it makes you pause and realize just how much time has passed and how much the world has changed. Twenty-five years ago, the idea of mixing animation and live-action was nothing new, but using computer-enhanced animation was a fresh approach. Then there was the mind-blowing idea of mashing up every animated icon from the golden age of animation. Yes, Disney and Looney Tunes side by side. The Fleischer Studios creations hobnobbing with the others. It had never been attempted before and was cause for celebration.

In the two and a half decades that have passed, Disney’s attempt to turn Gary K. Wolf’s protagonist into a cartoon perennial has petered out. Roger Rabbit was first born in Wolf’s 1981 novel Who Censored Roger Rabbit? and was turned into a major player thanks to Robert Zemeckis’ ambitious adaptation followed by a series of shorts featuring the bunny. Sadly, he hasn’t been seen since 1993’s “Trail Mix-up”.

As a result, the anniversary release of Who Framed Roger Rabbit? is cause for celebration and reflection. First, the film has been released for the first time on Blu-ray and looks wonderful. The combo pack comes with both a Blu-ray and DVD but no digital copy. The murder mystery featured Bob Hoskins as the proverbial private eye hired to investigate the alleged murder, bringing him to Toontown and its wacky inhabitants. There, you could see Donald and Daffy, Bugs and Mickey; imagine the pairing and there it was. Thanks to the production prowess of Steven Spielberg, Kathleen Kennedy and Frank Marshall, everyone happily signed off on their creations being a part of the fun. 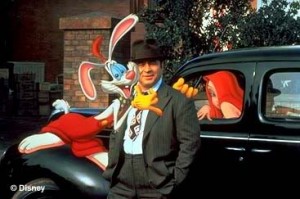 The film nicely mixed the film noir aspects of the real world with the slapstick shenanigans of the denizens of Toontown. It’s 1947 and Eddie Valiant is spying on Roger’s wife, the curvaceous Jessica (voiced by Kathleen Turner). Given the challenge of crafting a unique, distinctive cartoon voice, Charles Fleischer succeeded admirably. Roger’s disbelief at the revelation that Jessica has been playing pat-a-cake with Acme Corporation owner Marvin Acme (the late, great Stubby Kaye) is filled with pathos. When Acme turns up dead, Judge Doom (Christopher Lloyd) accuses Roger of the crime and the chase is on.

Nearly stealing the show is cigar-chomping Baby Herman (voiced by Lou Hirsch), sick of being an infant after five decades. But he’s a sidekick in service to the bewildered Rabbit. And when the chips are done, Herman stands by roger’s side. The humans do a fine job treading the line between playing things straight and interacting with just enough exaggeration to work well with the toons.

The novel had the unique aspect of the characters speaking with tangible word balloons that become slid objects and fill the air (he also used comic strip characters rather than cartoon players). Instead, Zemeckis filled the screen with larger-than-life antics and cameos galore (my favorite may be Snow White helping the disguised wicked stepmother down the street).

The transfer to high definition is handled with the usual Disney excellence and makes for a very pleasurable viewing experience. The sound nicely compliments the video so sit back and enjoy.

There should be fresh bonus material but we’re left longing. Instead, the DVD material from the last DVD release is here, some of it upgraded to high def. As a result, you still get Audio Commentary from Zemeckis, Marshall, associate producer Steve Starkey, screenwriters Jeffrey Price and Peter S. Seaman, and visual effects supervisor Ken Ralston; the three Roger Rabbit Shorts (“Tummy Trouble”, “Roller Coaster Rabbit”, and “Trail Mix-Up”); Who Made Roger Rabbit (10:55) featuring Fleischer; Deleted Scene: The Pig Head Sequence (5:30); Before and After (3:07),  live-action shots followed by their blended counterparts; Toon Stand-Ins (3:14), the on-set rubber puppets designed to guide the animators; Behind the Ears (36:37), the standard Making Of; On Set! (4:50), behind-the-scenes footage; and, Toontown Confidential, a separate pop-up track featuring text-based facts and trivia.