FORTIER TAKES ON ‘WINGS OF THE BLACK DEATH’ FROM RADIO ARCHIVES! 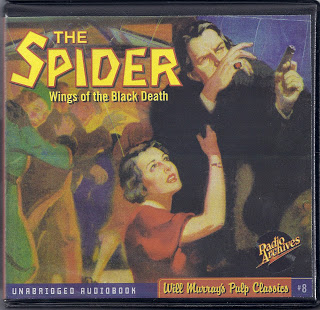 THE SPIDER
Wings of the Black Death
(An Audio Book)
Radio Archives.com
6 CD Set
4 hrs. 46 min.
With the expansion of the increasing popular New Pulp movement, it was only inevitable that the audio book industry would enter this exciting new field.  One of the most aggressive to do so in the past year has been Radio Archives out of Spokane, Washington, headed by the wonderfully creative and energetic Roger Rittner.  Working with noted pulp writer and historian, Will Murray, Rittner and Radio Archives have began doing expansive audio book versions of classic pulp thrillers with the feel of genuine old time radio melodramas.  It is important to note that these are not exact, full cast recordings, but by adding brilliant sound effects and period background music, Radio Archives provides such marvelous audio atmosphere as to beautifully mimic those old radio plays.
“Wings of the Black,” was written by Norvell Page, writing as Grant Stockbridge, and appeared in the December 1933 issue of “The Spider” magazine. This exciting audio adaptation produced and directed by Rittner, features Nick Santa Maria as both the narrator and primary male characters to include Richard Wentworth, aka the Spider, and Police Commissioner Stanley Kirkpatrck along with Robin Riker who takes on the role of Nita Van Sloan, Wentworth’s paramour.  They are absolutely marvelous, each evoking these well known characters as we all imagined they would sound…and act towards each other.
The plot centers about a fiendish villain calling himself the Black Death. He has managed to get a strain of the Bubonic Plague and is systematically unleashing it on the people of New York City. He will only stop when they pay him a billion dollar ransom.  As if that were not horrendous enough, this merciless fiend has managed to convince the police that it is the Spider who is responsible to the point of leaving the Spider’s telltale crimson seal on the foreheads of his policemen victims.  Now, for the first time ever, Commissioner Kirkpatrick finds himself believing the Spider is in reality a heartless monster and he proceeds to hunt him down with all the resources at his command. Suddenly Richard Wentworth is battling both the fiendish mastermind and the police, frantically trying to evade capture until he can solve the mystery of the Black Death and bring him to justice.
Rittner’s direction is pace-perfect as he leads both Santa Maria and Riker through each chapter hitting all the right beats, from moments of intense action scenes to those of quiet, anxious reflection as the pair, depending on each other as never before, endure the Spider’s greatest challenge of his crime-fighting career.  Radio Archives’ “The Spider – Wings of the Black Death,” is a winner from the opening scene to the last. It pulls the listener into the raw, brutal, fantastic world of the classic pulps and in the end provides such a unique, rewarding experience as to delight both old and new fans alike.
Finally, this audio book is available both as a digital download and in the 6 CD set, both reasonably priced.  For those into new fangled digital toys, this reviewer would imagine the digital version would be their obvious choice. Whereas the legion of audio book listeners who prefer enjoying books while on long road trips will find the CD set much to their liking.  Either way, this is a package you will be thrilled with.  And if you aren’t familiar with audio books, this is easily the right book to begin with.  Enjoy.
Share