Review: “The Curse of the Masking-Tape Mummy” by Scott Meyer 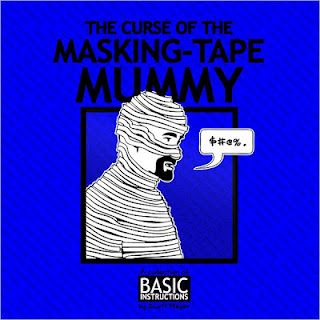 The Platonic ideal of the comic is precisely balanced between art and words, each as exquisite and precise and lovely as the other. And there might actually be one or two comics that come within spitting distance of that, but not much more: it’s an ideal because it really doesn’t happen. Every comic, like every work of art in any medium, has its strengths and weaknesses, and what good cartoonists do is to work to their strengths.

Scott Meyer’s strength is his writing: he’s witty, writes great dialogue, and has a enviable eye for the situations in his own life that can be turned into comics. His art is serviceable but a bit bland: he rotoscopes (or “traces”) over photographs, reusing the same poses (and, one suspects, the same art) repeatedly, and this means his cast is inherently limited and their poses equally limited. (It’s not a coincidence that the primary characters of Myer’s strip, Basic Instructions, are the Meyer stand-in, his wife, and his best friend.)

Meyer clearly knows what he does well: Basic Instructions is a deeply wordy comic, a four-panel newspaper-style strip crammed full of captions, explanations, dialogue and repartee, with just enough art to hold it all together. And the third collection of Basic Instructions, The Curse of the Masking Tape Mummy

, has just been published by the wonderfully named Don’t Eat Any Bugs Productions, bringing together 136 comics (just shy of a year’s worth at Meyer’s three-times-a-week posting schedule) between two dark-blue covers.

This year’s worth of strips does see Meyer extending the strip, moving out from his original office and home locations (it’s not coincidental that Basic Instructions got a big boost from a laudatory post from Dilbert‘s Scott Adams; Basic Instructions is one of the heirs of Dilbert in many ways, from that office focus to its snarky tone to the balance of art and writing) into superhero parody, with the introduction of Omnipresent Man, the Knifeketeer, and more to complement the original could-have-been-a-one-off-joke of Rocket Hat. That also gives Meyer a way to extend his cast without getting more models — he reuses himself and his friends (I assume that his models, whatever characters they turn into in the strip, are actually his friends, because otherwise it would be difficult to get them to do multiple poses) as those superheroes as well as “themselves.” (And even the names and powers of two of those heroes — Omnipresent Man and Mr. Everywhere — have a secondary joke in their re-use of the art for “Meyer” and “Rick”.)

Basic Instructions is a mature strip at this point; it has a solid cast with well-defined relationships, and Meyer is free to use that to just make his jokes and commentary — which range from the usual “my office-mates  have idiosyncrasies that horrify and disgust me” and “my spouse is vastly smarter and more in touch with the real world than I am” to the more particular nerdy complaints about Star Wars‘s AT-AT and to explorations of the odd psyche of “Rick.” Humor isn’t as universal as it should be — which is one way of saying that too many people don’t find the right things funny, the way I do and the universe intended — but Basic Instructions is nearly always quite funny, and always at least mildly funny. If you haven’t read it before, you should check it out — unless you’re some kind of un-American type who doesn’t like to laugh.

(My old review for the first collection, Help Is on the Way

, is also still floating out there in the Internet ether.)