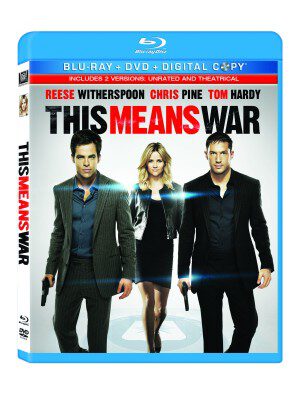 This Means War, out now from 20th Century Home Entertainment, had all the makings of a unique and fun romcom that instead turned out to be a dreadfully dull and predictable film that fell flat for audiences, critics and did dismally at the box office. The basic premise has Captain Kirk A and Shinzon as buddy spies vying to win the heart of Elle Woods, which meant they took the eye off their mission with horrible results.

McG is clearly a visually director who cares little about characterization or story structure which is a shame because with some effort, this could have risen above the obvious and been a modern day action romance along the lines of True Lies. In Los Angeles, CIA field operatives played by Chris Pine and Tom Hardy are the best of friends and have been for some time. But we’re shown how lonely they are and both coincidentally use the same online dating service at the same time.

Meantime, Product focus group facilitator Reese Witherspoon has also been out of the dating game for too long and is urged by her best friend Chelsea Handler to try online and guess which site she uses? Sure enough, she and Hardy, who is unhappily divorced from Abigail Spencer, agree to meet and find a spark. By sheer coincidence, she then meets Pine at the video store and there’s another unexpected connection. 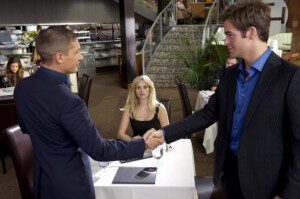 Back at the ultra-high-tech offices, they are scolded by their boss Angela Bassett (who is wasted here but at least has more to do than she did as Amanda Waller in Green Lantern) for being overly public in tracking down their prey, Til Schweiger, who got away. The bad guy is also seeking the agents to avenge his brother’s death during the pre-credits sequence.

Once the two spies realize they are dating the same woman, they establish rules to make their romantic quest a fair one and then go behind the other’s back to covertly observe the dates. Each man employs a team of agents, wasting countless man-hours and tax payer dollars, to investigate Witherspoon and record the goings on. Bassett remains oblivious to this distraction and the two competing teams are cardboard characters when they could have been a wonderfully B-story. 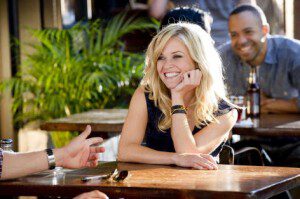 Of course, Witherspoon has to make her choice and when she does, that’s when Schweiger shows up and kidnaps her to lure the men into a trap. They put their differences aside and a chase ensues, a rescue made, and Witherspoon remains gape-jawed and shocked at the steady stream of revelations coming her way without once letting her and the audience process this.

The performers do what they can with the lackluster material with Witherspoon, notably the oldest member of the triangle (beating Hardy by a year and Pine by four). She’s happy with her work but seeks a companion, nicely waiting for several dates to pass before deciding it was time to have sex with both of them. Hardy and Pine work well enough together but there’s no real feel of camaraderie and brotherhood despite their professions to one another. Handler also makes her meager best pal part work and sparks her scenes. Spencer is sadly wasted while Rosemary Harris steals every scene she’s in as Pine’s grandmother. 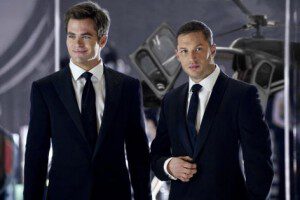 The stunts and pyrotechnics are typically strong for McG and the rest is a mess. The screenplay from Timothy Dowling and Simon Kinberg, who mined similar territory in Mr. and Mrs. Smith and Knight and Day, needed massive rewrites to avoid the predictable. In fact, just about everything feels familiar about the look, feel, and plot which is a real shame.

The video transfer to Blu-ray is fine and what we’ve come to expect form20th Century Home Entertainment. The audio is better than the video but it’s wasted on a film with mediocre score and sound effects.

The special features include an extended version of the film, adding several minutes that helps but nowhere near enough. McG is honest in his commentary track, acknowledging the film didn’t come together as strongly as he had hoped. We have six deleted scenes that also don’t add much to the film. There are three alternate endings provided, none of which change the utter predictability of the story. Additionally, there’s a CGI-generate animatic for a different opening that is interesting but doesn’t change anything. The Uncensored Gag Reel is more entertaining than the film but runs just four minutes. What could have been added to the end credits, perhaps, is the four minute Bachelorette Party, which would have nicely shined the spotlight on Witherspoon’s modern day woman.