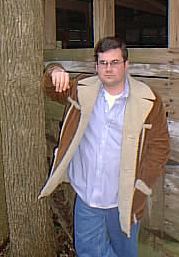 AP: Who is Joshua Reynolds?
JR: An influential 18th Century English painter with a fondness for portraits. Also, me. I was born in the great state of , the only state too small to be a country and too big to be an asylum. I come from a long line of pirates, swindlers, preachers, bandits, judges and opportunists and I like to feel that I’m keeping my end up in regard to them, having fancied a career in at least two of those occupations. I’m married to a wonderfully supportive Englishwoman, who snatched me from the backwoods of rural Cackalackee and brought me to the disturbingly sedate region of as soon as everyone’s back was turned.
AP: Where do you live and what do you do to keep the bill collectors at bay?
JR: Currently I live in Sheffield, England with my lovely, patient, tolerant, calm, patient wife, and besides the occasional bit of ghostwriting and copywriting, I mostly use what any red-blooded American uses against the bill collectors-caller ID and a good pair of running shoes. I kid, I kid. I’ve never run from a bill collector in my life.
I bury them in the backyard, like a sensible person.
AP: You’ve had around seventy-five short stories published as well as the DRACULA LIVES! novel.  Add to that the reviews and essays you’ve done.  Where does the energy come from to write all that?
JR: I sold my soul to the Devil at the crossroads for a heart made of ten hearts. Baboon hearts, too. High performance, all the way. Seriously though, I write fast and I don’t sleep much. It works out well, don’t it?
AP: You’ve written in a lot of genres; pulp, horror, steampunk, fantasy, sword and sorcery, southern gothic…what’s your favorite?
JR: All of the above! I’ll write most anything as long as its got a good beat to it. 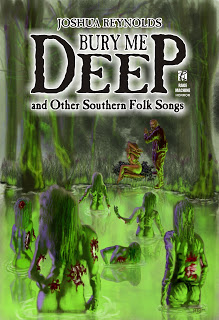 AP: What’s your definition of Pulp?
JR: Fast-paced, plot-orientated fiction, with little regard for the rules and conventions of modern genre.  If its got Hitler’s brain in a robot body fighting a ghost-hunter who’s also a zombie, WITH NO EXPLANATION for how those characters got that way? And no need for said explanation? That’s pulp. It’s the equivalent of a literary adrenalin shot into the brain. Good pulp should make the reader see sparks and smell stories.
AP: You’ve written a lot of horror stories set in your native South Carolina.  Why is so full of terror for you?
JR: Instead of a straight answer, here’s an anecdote. In , there is a county. And in this county is a town. And just outside of this town is a road. And branching off of that road is a dirt trail. And lining that trail is a chicken wire fence, blocking off the dark trees from the rutted path. The fence goes the length and width of that patch of woods, cutting across property lines and walking paths. And on that chicken wire fence are bones. Hundreds of bones, of all shapes and sizes, from all manner of formerly living things. And above these bones, in the branches of the trees that shade the path are wind chimes made of yet more bones, and they rattle ALL THE TIME.
I have never seen the house at the end of that path, though I know it’s there. I don’t know who lives there, or why they line their fence with bones. I just know that there are more bones every time I see it, and there are more wind chimes and that the sound they make gets louder every year.
And sometimes, just sometimes, at night, before I go to sleep, I wonder what that fence is supposed to keep out…and then, I wonder if it’s keeping something in.
AP: You have an affinity for classic horror characters such as Dracula and Frankenstein.  Why do those characters fascinate you?
JR: Short answer? Because they persist. I’m fascinated by what makes some characters stick around in the public consciousness while others fade away. Dracula wasn’t the first literary vampire, but he’s the best known…why is that? Why did he become a pop-culture powerhouse instead of Carmilla or Ruthven or Varney? Why do these characters resonate so strongly with us? Why is Frankenstein a cultural slang term for ‘bad science’?
Also, I just dig ’em, y’know? I mean Frankenstein, dude. With the lightning and the arms and the GRAARGH and the ice floes and stuff? That’s just cool. That dude needs to fight a Yeti ASAP, know what I’m saying?
AP: Tell us about DRACULA LIVES!
JR: No.
Fine, if you insist. Dracula Lives! is the first in a series of short novels concerning the resurrection of Dracula into the modern day and the unpleasantly gory hi-jinks which ensue. There are spies, secret organizations, Satanists and, of course, vampires. Also an Aztec mummy. It wears its influences proudly on its bloody sleeves-from Ian Fleming to Brian Lumley to Colan and Wolfman’s Tomb of Dracula comic. If any of that trips your interest meter, this is the book for you. 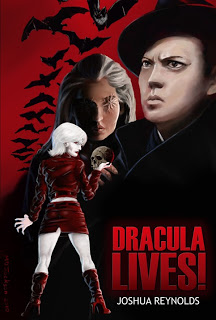 AP: One of the most interesting things about your work is how you mix genres.  Such as horror and espionage in DRACULA LIVES!  is this something you do deliberately or is that just how your brain is hardwired?
JR: Well, first off, I’m not a big believer in ‘genre’. It’s a marketing ploy that I think is, at the best of times, unfortunately necessary, and at the worst of times is an active disservice to the books that it’s applied to. That said, I have one real rule when it comes to writing: ‘whatever sells the story’. I’ll mix and match whatever elements seem necessary to produce a saleable work of fiction…if that’s gorillas on blimps or cowboy-vampires, I’ll do it. Too, continuing along that mercenary line, I’ve found that you need to do something a bit different to get noticed by editors and readers alike.  Something simultaneously recognizable and unique is the best bet, so I often juggle genres to achieve that.
Basically, I do it because it works.
AP: What are your plans for future Dracula novels?
JR: Well, short-term, there are two more books forthcoming-Dracula Unbound! in October 2011 and an as yet unnamed third book slated for 2012. After that, well, I guess it just depends on how well they sell. I’d love to write one a year for the next ten years, but really, it all relies on how popular the series is with book-buying public.
So, if you like the first book, buy multiple copies. Seven or eight apiece should do nicely, I think.
AP: What can we expect from you in 2011?
JR: Oh heck, lots of stuff. The aforementioned Dracula Unbound!, of course. I’ve got a story in Airship 27’s upcoming third volume of Sherlock Holmes, Consulting Detective. I’ve got stories being turned into audio productions, I’ll be appearing in a number of short-fiction markets, including Innsmouth Free Press and a forthcoming time-travel anthology from Permuted Press. Too, there’s several things I’m waiting to hear about as of yet.
AP: What’s a typical Day In The Life of Joshua Reynolds like?
JR: I’m up at six in the AM to see the wife off to her job, then it’s an hour or so on the interwebs as I guzzle my morning coffee, checking e-mail and hunting for new short-fiction markets to submit to. After that, I spend a few hours editing what I wrote the day before, then I dive into whatever I’m working on for the day. Once I hit my page count for the day on that particular project (barring deadlines), I switch up and move onto something else.  I generally have five to ten short stories on the go at once, staggered according to relative deadlines, and at least two novel-length works, as well as the odd book review. I take a break about five to update my various blogs and facebooks and such, cook some dinner for the wife, then it’s back to work for another hour or two.
I try and get in a good eight to twelve hours a day, five to six days a week, if possible. Sometimes it’s less, sometimes it’s more.
I keep busy, is what I’m saying.
AP: Here’s your chance for a gratuitous plug or shout out.  Go.
JR: Ooh, there’s so many people I could give a shout out to…too many, in fact. So instead, I’ll opt for the gratuitous plug(s): Dracula Lives! is on sale now at Amazon for the amazingly low price of $8.95, which is a bargain, when you think about it. Then again, you could splurge and grab a copy of Jim Anthony, Super-Detective: The Hunters written by myself and Micah Harris. That’d be great. Oh, you could pick up the two new anthologies from Woodland Press, Specters in Coal Dust and Mountain Magic: Spellbinding Tales of Appalachia, both of which feature stories by me. Or, you know, if free stuff is your bag, you could head over to Dunesteef Audio Fiction Magazine or Cossmass Infinities and give a listen to what stories of mine they done produced into some really stunning audio-performances.
AP: Anything else we should know about Joshua Reynolds?
JR: Plenty, but you wouldn’t believe me if I told you.
A complete listing of the published works of Joshua Reynolds can be found here:
http://joshuamreynolds.blogspot.com/p/published-works.html
Share