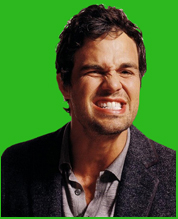 This past weekend I decided to place my vote (that’s “Dollar Bills” to DC’s Bob Wayne) for The Avengers for a second time. I did it first and foremost to teach Liam Neeson a lesson: If you don’t know the movie adaptation of a board game is a bad idea, maybe you need a new agent. Second to that, I personally wanted to see the film again to revel in Mark Ruffalo’s performance as the Hulk. If there were to be a single break-out star (pun intended) of the film, Bruce Banner certainly was it. For many who saw The Avengers, this is a shared sentiment. So, this begs us to ask the dudes at the House of Mouse… What’s next for the spinach-hued smasher?

If we are to believe the internet (and when has that ever led us down the wrong path?), The Hulk will next appear on the small screen via ABC. The network is pursuing a reboot of the once powerful series starring Bill Bixby and Lou Ferigno. If this is to be true… I throw myself on the mercy of Mickey. Don’t do it.

Simply put? The Hulk begs for bigger and better treatment. The old series did last five seasons, and featured a few TV movies (co-starring Daredevil and Thor no less!), but this was long before the days of CGI. Long before the Hulk decimated Harlem. Or flew into the upper atmosphere on the nose of a fighter jet. Not that the recent movie Hulks have been perfect mind you, but they put poor old Lou out to pasture pretty quickly when it comes to conveying the size and power of the Incredible Hulk.

If Marvel/ABC ponies up enough dough to downsize the Hulk to the boob tube, it would certainly provide the interest of advertisers and the public at large to watch. But even with an HBO budget for a series, could today’s special effect houses handle the behemoth? In a word… no.

The fluidity of the Hulk within the Avengers was, as many fans agree, the first time the character didn’t feel entirely too fake to enjoy. Ang Lee’s monstrosity lumbered around the fabricated sets like a big baby throwing a tantrum. Louis Leterrier’s Hulk (who obviously did way more cardio than Ruffalo’s) fared better, but was more Max Headroom than Golum by comparison to the most recent iteration. While CGI and effect houses have certainly improved their efforts on TV, do yourself a favor: Watch the best episode of Heroes, Smallville, or Sharktopus Vs. Crocasaurus. Then go back and watch the Avengers. I’ll wait for you. Go on. Done? Now tell me that the scene-eating Hulk would be done any justice on a fraction of the budget that went into creating him on the big screen.

Don’t get me wrong, kiddos. For the chance to see Mark Ruffalo take the character on in a weekly serial, I’d be DVR’ing that series faster than Jeph Loeb could crap out a comic book. And while a TV show would obviously focus on Banner more than the titular titan, when it would come time to Hulk out, we’d get only a poor representation of what we know the character could be. And if they were to regress back to hiring a bodybuilder to smash cardboard walls? Well, who amongst us would not scoff as we wrote anonymous hatespew across the message boards?

If we can agree that Ruffalo’s Banner is following the Incredible Hulk movie of 2008, then we must know that there was an amazing set-up left for the sequel. Samuel Sterns was shown at the end of the film getting dosed by Banner’s blood/chemical sludge. His head began to throb and pulsate, and a creepy smile crawls across his face. Obviously meant as a wink and a nudge to the Leader, one of the Hulk’s better villains. With Ruffalo’s Banner perfectly balancing the line of intelligence and pent-up rage, only the movie screen can truly do the character justice in a battle with another gamma irradiated foe. Relegated to a lesser medium (in terms of only the effect work mind you), the Incredible Hulk might only come across the Credible Hulk.

I say make S.H.I.E.L.D. the TV show, and let Hulk continue to smash the box office.