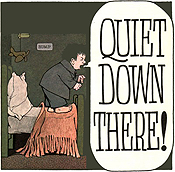 He was a curmudgeon who didn’t have children, didn’t especially like children, and yet was probably the most noted children’s book writer and illustrator in the past fifty years, J.K. Rowling notwithstanding. He was Maurice Sendak and he died May 8th at age 83 after a stroke.

Sendak was famous for many books, especially Where The Wild Things Are, a favorite in our house. I got my Mary the full set of the McFarlane figurines and we saw and liked the movie version (many people didn’t but we did, nyah nyah).

He was infamous for books like In The Night Kitchen because its hero is a young boy named Mickey who falls out of his night clothes and runs around naked. As Lewis Black might put it, “Some people see pictures of a little boy’s wee-wee and it makes them want to cry.” It’s gotten the book put on the American Library Association’s “100 Most Frequently Challenged Books of 1990–1999.”

Banning In The Night Kitchen. Some people need to grow up. Still, if you’re not pissing some people off, you’re not doing it right. Sendak did it right.

Maurice Sendak had a diversity of styles. I have a collection of the two-volume set: The Juniper Tree and other tales from the Brother Grimm, translated by Lore Segal and Randall James. The illustrations are incredibly detailed and are often strange and reflect the source material magnificently. In the same style he also did The Light Princess and The Gold Key, both written by George Macdonald and they are beautifully realized as well. The latter is a particular favorite of mine. In the aforementioned In The Night Kitchen, the story proceeds from panel to panel like a comic book or, perhaps more aptly, like a comic strip: specifically, Little Nemo In Slumberland.

Sendak produced films, including the animated special of his work Really Rosie, and did sets for operas including Mozart’s The Magic Flute (Sendak cited Mozart as one of his great influences along with Walt Disney’s Fantasia.) He was part of the National Board of Advisors for Children’s television Workshop during the development of Sesame Street. He had a rich and prolific mind.

As I get older I get crankier, and so I can appreciate Sendak’s curmudgeonly side. He demonstrated it earlier this year in a wonderful two part interview that he did with Stephen Colbert and that you can watch here and here.

To note Sendak’s death, Colbert played a few additional pieces from the interview this week. My favorite was when Colbert compared Mozart to Donald Trump and Sendak instantly replied, “I’m going to have to kill you.” Funny, funny stuff and I think it was one of Colbert’s best interviews.

Sendak claimed that he didn’t write for children; he wrote for himself and that was part of his genius. As with all good children’s literature, the work speaks not only to children but the child in all of us. We see and we respond on a deep instinctive level. Everyone I’ve known has had a child alive inside of them – not always for good effect. In other words, our inner Max. I have several children inside of me and some of them are brats knowing only that they want what they want when they want it. Sendak knew and celebrated them as well.

Sendak may be gone but his work is there and so the best parts of him are as well. We can still meet our Wild Things and have a wild rumpus in the pages of his books. I wouldn’t be so bold as to say that Sendak would be pleased by that; Sendak was too much of a curmudgeon. I think he would nod and then go back to listening to Mozart.

Just don’t compare Mozart to Donald Trump because, then, Maurice Sendak would have to kill you.