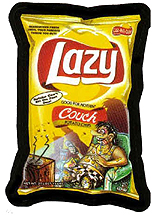 Today I’ve come up with a brand new superhero and I’m proudly unveiling him right here. ComicMix – meet The Lazy-Man™*

The date of this writing is April 29th, 2012 and it just so happens to be my birthday. Somehow after working all month on two other book projects a TV project and various other stuff like Comic Con and staying up drinking tequila most of last night, somehow Lazy-Man just came to me!

Wow. What an unexpected yet not unwelcome birthday gift!

I work really hard but last week was such a bitch on my time and gray matter that towards the end of the week I felt overwhelmed and a bit depressed. But somehow at the very depths of those emotions came Lazy-Man!

Why, Lazy-Man is all of us when we have reached a point where we just need to be lazy. I say Lazy-Man is all of us, but on the one in a billion chance that this bullshit idea I made up just because I’m too exhausted to think of something to write about catches on, let me be clear-Lazy Man is me and me alone.

I see Lazy-Man as a six-issue mini-series, which coincidently fits my “must write about comics” criteria for ComicMix.

Lazy-Man’s story is told via his journal entries. The first of such are here as a ComicMix exclusive:

From The Journal Of Lazy-Man

Yesterday morning I did not exist. Yesterday afternoon I was not alive. Last night at around 11pm I was born fully formed.

My mother was called Tequila my father’s name was Fatigue. Together they made me. I am Lazy-Man! Beware me! Beware my wrath! Now go! Go before you fall victim of Lazy-Man!!

But-before you go, can you hand me the remote?