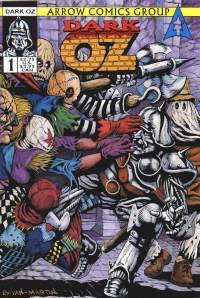 Another day, another comic book series being adapted into a movie. Variety is reporting that Pras Michael, best known as the guy who’s not Wyclef Jean in the Fugees, picked up film and TV rights to the ’90s comic book series Dark Oz.

The series, which was first published by Caliber Comics under the title Oz and then a five-issue miniseries titled Dark Oz from Arrow Comics Group, featured an older Dorothy returning to Oz and having further adventures, though of a much more dark variety. Hence the title.

Interestingly, the comics are long out of print. But you can still read them in digital form. Caliber and Arrow Comics have a deal with DriveThruComics to sell the issues online in downloadable form.

Production on the film is slated to begin late this year. The script was adapted from the original stories of Dark Oz creators Aaron Denenberg, Ralph Griffith and Stuart Kerr, Variety reported. It’s planned as a live-action film, with designs on making it into a trilogy.

Pras is also a producer of the upcoming film The Mutant Chronicles, which surprisingly enough is not a comic book adaptation.