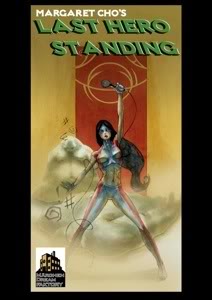 For anyone in that weird cross section of humanity that enjoys Margaret Cho and superhero comics, this next item of news is sure to bring nirvana to your soul.

Cho has joined up with Märchen Dreamfaktory’s Creative Director, Tony Mark, to create a graphic novel. With a working title of Last Hero Standing, the comic will follow the exploits of super heroine Misty, an aspiring comic and the only super hero to survive an all-out attack from the super villains.

"Margaret’s fans will definitely recognize her edgy humor," says Mark. "I think the premise gives her a lot of room to express herself in her own voice, but also the freedom to have fun in a way she never has before."

Utilizing the in-house talents of Art Director Gary Laib and artist Chris Ewald, Märchen Dreamfaktory plans to have the graphic novel on shelves by early 2009.