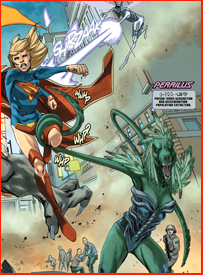 But it bugs me. And I have this space every week, and I plan to use it to raise your ire as well.

The new issue of Supergirl out this week (#7) features a new team of adversaries for the Maid of Steel. They are the Worldkillers, four creatures taken as embryos from different worlds, then grown on Krypton, enhanced with terrible, world killing abilities.

They are shown to be four very different species. One is humans, one catlike, one like a dog or bear, and one that appears to be some kind of lizard. All are female.

Because they are all female, when they are grown and fight Supergirl they wear scanty little costumes. These costumes show off their breasts. Even the dog’s, who, rather refreshingly, doesn’t seem to have any.

The lizard, however, does. Her name is Perrilus (which confused me, since the -us ending in Latin means the noun is masculine) and she wears some kind of corset which pushes up her breasts.

Breasts are used by mammals to feed their young, who are born live. Lizards are reptiles, cold-blooded creatures who lay eggs and don’t nurse their offspring. There is no reason for Perrilus to have breasts.

I suppose that the Kryptonians could have given her breasts as part of her enhancements, along with her ability to “generate viruses,” but if that’s the case, we are never shown their use in combat.

And maybe she is flat-chested and, like so many high-fashion models and drag queens, has learned how to use the plastic pads, affectionately known as “chicken cutlets,” to push up the tissue in her chestal area to resemble breasts. Again, if this is the case, we are offered no explanation,

Perhaps these breasts are to distract the enemy. They certainly distracted the letterer, who, on page 10, twice refers to the gang as “Wordkillers.”

As Mindy Newell said a few weeks ago, a lot of women got into comics as girls because we enjoyed the Supergirl stories. She was powerful but not threatening, someone we could want to be like. Someone we could believe would like us. DC wastes a real opportunity when they don’t use a title like this to attract a new generation of young girls to superhero comics.

I’m not saying that tits on a lizard is a deal-killer for girl readers. I’m not sure anybody but me (and now, I hope, you) would notice. But in a week when Katniss Everdean flexes her smarts and her abilities with a bow and arrow in The Hunger Games, it seems like even DC Comics would realize they have to be a little bit smarter to attract that kind of audience.